The MMA world awaits the UFC debut of former Bellator lightweight champion Michael Chandler. Likely taking place in the first half of 2021, who could the promotion line up for their latest high-profile signing?

We were formally introduced to the UFC era of Michael Chandler’s MMA career earlier this year, but are still awaiting his first bout in the promotion. Since signing from rival promotion Bellator MMA, the former 155-pound title-holder has been linked with a variety of opponents from the UFC’s lightweight division.

There is no shortage of options, in what is one of the most talent-rich weight classes in the sport. After being the emergency fill-in for the title fight between Khabib Nurmagomedov and Justin Gaethje earlier this year, it’s clear Dana White and Co. have big plans for Chandler.

Since that title fight at UFC 254, a couple of high-profile lightweight fights have been scheduled. Neither of them have included Chandler.

At UFC 256 in December, third-ranked Tony Ferguson is slated to fight sixth-ranked Charles Oliveira. The following month, at UFC 257, fourth-ranked Conor McGregor is returning to action to rematch second-ranked Dustin Poirier in promotion’s the first pay-per-view of 2021. Add the retired(?) Khabib Nurmagomedov to the “Not Available” category, and Chandler’s list of potential high-ranked opponents dries up pretty quick. At the same time, the promotion doesn’t sound like they’re in any sort of rush for Chandler to make his debut.

Thankfully, as mentioned earlier, this division is loaded. A random draw of any of the available fighters in the top-15 in the UFC, and even the top 20-25, would fit alongside Chandler in a high-profile debut bout. We think these available fighters fit better than most.

The highest ranked lightweight fighter available, and a guy Chandler has already called out, Justin Gaethje would be a huge way to debut. Fresh off of his title fight with Nurmagomedov, a match-up with Gaethje would immediately put Chandler into a very crowded title picture.

It’s unclear when Gaethje will fight next. Given the fact that the UFC isn’t in a hurry to get Chandler in the Octagon, waiting for Gaethje would make some sense. As would waiting for the other major 155-pound bouts mentioned above to shake out in early 2021. Either way, being in the discussion with that group is a good sign for Chandler.

Gaethje knows all about debuting in the UFC, and doing so in style. While replicating Gaethje’s performances is an impossible task for most, a Chandler victory over the fan-favorite would rank among his very best. A loss for the former Bellator champ would sting, but recovering from a loss to Gaethje would be easier, when it comes to the rankings, than most other match-ups. 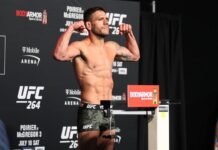