Brazilian acrobat (well, not really) Michel Pereira will return to the UFC octagon in December, where he will face Khaos Williams in what promises to be an explosive affair.

The welterweights are the latest addition to a growing card that is expected to be topped by Khamzat Chimaev vs. Leon Edwards. The event, set to take place at the UFC Apex in Las Vegas, Nevada, will be broadcast on ESPN+.

ESPN was first to report news of Peireira vs. Williams.

Williams (11-1) will be making a quick turnaround in the fight. He last competed at UFC Vegas 14, picking up a knockout against Abdul Razak Alhassan in all of 30 seconds.

Khaos isn’t exactly known for his lengthy fight times — his UFC debut ended in just 27 seconds. It was also a knockout in William’s favor. All said, Williams has six first round finishes to his name.

Pereira (24-11, 2NC) is coming off a win against Zelim Imadaev that proved “Demolidor” can be explosive and entertaining without depleting his gas tank in the first three minutes of a fight. It didn’t hurt that his opponent is also a downright horrible human being. After previously getting into a confrontation with Max Griffin, Imadaev slapped Pereira during the UFC Vegas 9 face-offs.  Not to mention, Imadaev, since released by the UFC, came out as pro-terrorist recently.

In any case, Pereira’s stock is up after that performance, which saw him slap his opponent back — during the fight. That snapped a two-fight losing streak and drew his record to an even 2-2 inside the octagon.

Pereira captured fight fans’ imaginations by executing moonsaults and other flashy attacks while fighting for ROAD FC and other promotions. He has consistently refused to tone it down while fighting in the UFC. At least until his last fight, which saw the Brazilian maintain a steady pace, while being no less entertaining. 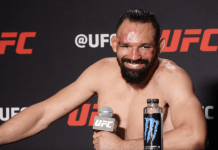