The tax man is going to love Joaquin Buckley come tax season. At UFC 255 on Saturday, Buckley once again finished a fight with an impressive knockout. He once again picked up a Performance of the Night bonus for his efforts. In just two months, Buckley is an extra $100,000 richer.

Not a bad haul.

This time around, Buckley earned his post-fight bonus for knocking out Jordan Wright as part of the UFC 255 preliminary card. No kick, this time — Buckley got it done with his hands. It was pretty enough (though Kayne West might not release a track for this one). Buckley, meanwhile, continues to be one of the big stories in the UFC in 2020.

The other Performance of the Night bonus on Saturday went to Antonina Shevchenko. Sister of flyweight champion Valentina — the pair made history by being the first sisters to compete on the same UFC card — Antonina showed an improved ground game at UFC 255. Her wrestling and grappling were on point, and in the end, she finished “Queen of Violence” Ariane Lipski via TKO.

Fight of the Night honors at UFC 255 when to Louis Cosce and Sasha Palatnikov for their card-opening fight. The pair slugged it out in a wild brawl that lasted until the third round, when Palatnikov finished Cosce with strikes. Both fighters were making their debut in the octagon. 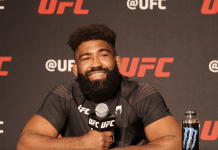