Julianna Miller went from a strong amateur career, to a win in her pro debut, to signing with Bellator MMA — where teammate Ilima-Lei Macfarlane rules the women’s flyweight division

Only instead of making her Bellator debut, Miller will be fighting at Invicta FC 43 this Friday night. Chalk that up to another case of coronavirus confusion.

As far as 2020 goes, Miller told Cageside Press recently that the year has been “a roller coaster. I feel like everybody’s been through the roller coaster.” No surprise there. When it comes to fighting, however, it’s been about a year and a half since she last competed.

Injuries and of course the pandemic had Miller on the sidelines. Her deal with Bellator hit a snag as well, with no fights available earlier this year. “They weren’t planning on having fights til 2021. I’d been training non-stop,” she explained. Miller’s team reached out to the promotion, saying that they were still interested. But with the promotion only returning to action in late July, “We asked if it would be okay if we signed with Invicta.” Bellator gave the okay. Only for the organization to reach out just weeks ago, offering a fight.

By that time, Miller had a fight lined up with Kendal Holowell on the Invicta FC 43 card.

While Bellator is still a possibility, “my dream is actually to end up in ONE Championship. I love Asia, I love Japan, and I’m just trying to work my way back over there,” said Miller. It would certainly be another interesting step in her MMA journey — which also saw her compete as an amateur on the infamous Golden Boy MMA card featuring Tito Ortiz and Chuck Liddell.

Training at 10th Planet, Miller has been around fighters like Macfarlane and Liz Carmouche for years. Which has allowed her to pick up some key lessons

“I think that the most important thing is where your mind is at, and your intelligence level. That’s one thing that I learned from Ilima mostly,” Miller explained. “She is so smart, and she works so hard to make sure that her mind’s in the right place and that she builds that confidence. I learned that if you don’t believe in yourself, neither will anybody else, and when you get in the cage, that’s going to show.”

Mental work is number one. Number two, another piece of advice she got from Macfarlane, was “don’t get fat right after your camp, so you can stay ready to fight.” As hard as it is to follow that rule, “it’s kind of helped me get a few more fights,” said Miller.

Miller’s on a big platform come Friday night, with Invicta FC 43 airing on UFC Fight Pass. But the size of the show doesn’t matter to the flyweight. “I hope this isn’t offensive to anyone, but honestly I do not care. I don’t care who’s watching, I don’t care where I’m fighting, I’m here for war, and to release a killer side of me that I can’t legally do at any other stage in life.”

Of course there’s training partners, but as Miller pointed out, in training, “I’ve never thrown an elbow as hard as I can, because I don’t want to hurt my partners, and there’s just no need for it. So I just want to go out there, and I want to go to war and I want to do my thing. I could be on any stage, I could be on a dirt road in a chicken coop throwing down, and I’m still going to do what I came to do. I’m very blessed, grateful and excited to be on this major card, but that has nothing to do with where my mind is at.”

That’s similar to something she told the legendary Liddell, after a couple of meetings with the UFC legend at that Golden Boy MMA event. Liddell originally didn’t see Miller as a fighter. “What? I thought you were a ring girl!” Miller recalled the legend exclaiming when they bumped into each other a few days out from fight night.

After a few more chance encounters, Liddell asked the flyweight if she was nervous ahead of her fight. “I was like ‘I just want war, I’m here to kill.'” Admitting that she’d had a rough past, she told Liddell that “for me to be able unleash a side of me that’s not normally okay, I’m just stoked I’m not going to get arrested for beating someone up.”

Liddell’s response? “Yeah, that’s why I do this sport.” 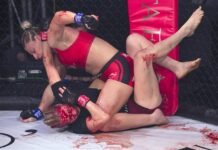 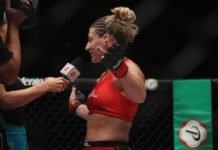 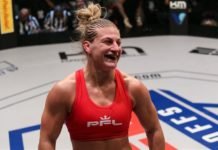