The UFC’s latest trip to Vegas was riddled by injuries. Within a day of the UFC Vegas 14, they would ultimately see three fights drop out due to non-COVID related health issues. While six fighters didn’t get to make that long (although somewhat shorter in the Apex) walk to the cage, some of those that did took some big career steps. Today, we look at who might be next for some of those fighters.

You have to like the call out of Conor from dos Anjos – a guy who correctly points out there are only two people who have undisputed championships in the division currently. With that being said, winning a decision over Paul Felder is not going to make him the money fight that McGregor wants, nor one the UFC wants. There are still plenty of names towards the top of the 155lbs heap. Both he and Charles Oliveira are sort of in the same spot. They are bad match-ups for everyone in the division and don’t quite have the steam to get one of those big names. A showdown between the two of them should land the winner the big fight they’ve been pinning for.

With just 57 seconds of cage time Khaos Williams now sits at 2-0. It seemed impossible that he would be able to top his debut performance, and while it took an extra 3 seconds, it was much more impressive. Some people might want to see him against a grappler to see if he’s the whole package. Me? I just want to see someone crazy enough to continue throwing with him for a meaningful amount of time – which in this case may just be a couple seconds. Niko Price may be someone who is crazy enough to do just that. He has with so many people before. Plus, with his resilience and chin, it would be fascinating to see how much punishment he could take from Williams.

The level of competition Yoder regularly has faced is impressive to say the least. Regardless of who is standing in front of her, she makes it a fight. In her win over Miranda Granger this past weekend, she showed that her grappling makes all the difference, particularly when she is on top. She may not be ready for the top 15 yet, but Brianna Van Buren would be a fun tilt to see who’s close to that point. Van Buren is not easy to get down, but Yoder’s length may also be difficult for her on the feet. In short, the fight makes all the sense in terms of style and place in the division.

While this was supposed to be Brendan Allen’s chance to crack into the top 15, Sean Strickland stood in for Ian Heinisch, when he was forced to pull out, and spoiled that opportunity. As a result, we see Strickland with all the momentum now as he picked up two big wins in the last month’s time. Why not give him the fight that Allen was supposed to have? Heinisch would be another fun test of Strickland’s wrestling defense, in fact one that might be tougher than Allen. It will also give us an idea of just how impressed we should be with the last 2 striking performances of Strickland.

Although she walked away with a unanimous decision, a lot of people agree that McKenna was largely out-grappled by Kay Hansen. She ended two of the rounds in advantageous positions, but only after spending large portions of the round with her back taken or in bottom mount. The best part of McKenna’s game was her striking and the combinations that she put together. It would be nice to see her get a chance to showcase that more against someone who will pose her more threats on the feet. Loma Lookboonmee is a unique test on the feet with her Thai style is tough clinch game. Additionally, it’ll test Mckenna without moving her up much more than her last bout. 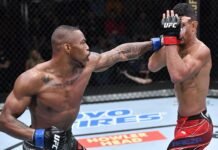