Bellator 252 went according to plan for Emmanuel Sanchez. Now, he has a title fight ahead.

“I want to say better [than planned],” the featherweight grand prix quarterfinal winner said following a five-round decision win over Daniel Weichel. The victory sets Sanchez (20-4) up for a semifinal title fight against Patricio Pitbull.

While it “would have been better if I got the finish, in the first like I said I would. Or even in the second when I dropped him with that body shot,” added Sanchez, “all that matters is we got the victory. I’m healthy, he’s healthy, he’ll have a safe flight home, he’ll fight again, and I know people will be excited to see him fight again after this. Likewise myself in this grand prix. So I’m looking forward to going out. Two down, two to go.”

Two to go to win the tournament, and the million dollar prize at the end. Only one to go to potentially claim featherweight gold, as Patricio Pitbull’s title will be on the line in the pair’s semifinal fight. Asked later if avenging his 2016 loss to Daniel Weichel felt better than getting one step close the million dollars, Sanchez admitted it did.

“Honestly getting that win back [was better]. He taught me a very valuable lesson back in 2016,” said Sanchez. “The 25-year old me thought that was the best me. The arrow’s got to be pulled back before it can be shot forward. So I’m very glad that I got that victory back. I’m glad that I even lost that fight back then, because [otherwise] it wouldn’t have put me into this position that I’m in now, and made me into the fighter that I am now.”

While Sanchez wanted to be “one and done in the Mohegan Sun,” the fighter known as “El Matador” does see an upside to having gone the distance at Bellator 252. “A little bit. Now that’s twice now I know I can five rounds. As obviously as aforementioned, it looked like I can go 10, 20, and just to the death. But that’s the type of person and fighter I strive to be,” he explained. “Not like every fight’s got to be like a Rocky movie and to the death, but that’s what the fans want to see. That’s what the crowd wants to see, everybody. They want to see finishes, stoppages, and that’s what I want as well too, to be known for.”

Now, it’s on to Patricio Pitbull, in what very well could be Sancehz’s Rocky moment. The pair met once before, in 2018. Emmanuel Sanchez lost that shot at gold. Sanchez himself has grown as a fighter — but he sees Pitbull as having grown just as much. “I believe so. I think he’s got the same hunger, maybe. it’s harder, when you’re on top, being the most dominant champion. And you’re the champ-champ, too,” he noted. But when it comes right down to it, “I want it more than him, and I want that win back.” 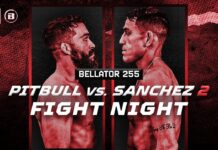 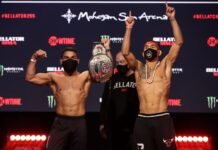