Team Alpha Male’s Cory McKenna wasn’t necessarily expecting a fellow young prospect for her UFC debut. “You tend see a lot of the new prospects coming in, they tend to fight someone who’s kind of on the back end of their career, on their way out. That transition seems very common in the UFC,” she said during the UFC Vegas 14 media day this week.

Instead, McKenna (5-1) will make her octagon debut against a fellow youngster, Kay Hansen, this Saturday. Both 21-years old, the strawweights will serve as the event’s featured preliminary fight.

Given the pair’s youth, it would seem the fighters are pretty even. But during the media day, mention was made of Hansen having the advantage in fight years. Not so fast. In terms of pro records, Hansen has a few more fights, and arguably against tougher competition. But McKenna has been competing longer when you add in her junior and amateur efforts.

“My first fight was 2015, I was 15 years old. I think a lot of people don’t realize quite how extensive my background is in itself. I’ve been training martial arts over half my life now,” McKenna pointed out. That includes competing in jiu-jitsu every weekend as a kid, and winning multiple Junior Muay Thai titles. “I think a lot of people don’t realize how much experience I had in the amateur and junior ranks before turning pro. And I think there’s only like three or four fights difference in the pro record for us. If anything, I’d say I have the experience edge. I think I’ve just been a little bit more quiet than others.”

One area of concern on paper would be the ground game. Hansen has multiple submission wins in her pro career. But it’s not an area that McKenna has obsessed over heading into UFC Vegas 14.

“Not really. I approach every fight the same,” she explained. “I’m obviously not going to sleep on her striking. And as you say, you’ve got to have respect for her ground game. But at the same time, when I go into a fight, I just focus on everything and make sure that I am the best version of myself all-around. So I’m confident whether it’s on the feet, whether we’re wrestling or grappling.”

With her own jiu-jitsu background, “I don’t think there’s much threat there anyway,” McKenna added. “Not that there’s not much threat, but I’m not that worried about it, if that makes sense. I’m comfortable if it ends up there and confident that I can actually probably get a submission myself over her.” 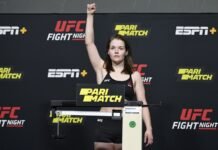