His rivalry with Brendan Allen put aside, at least for now, Ian Heinisch has managed to land an even bigger fish: Kelvin Gastelum. Per a report by ESPN, Heinisch, who was pulled from last week’s UFC Vegas 13 card the day of due to a positive COVID-19 test, will face the Ultimate Fighter winner on January 30.

Both sides have reportedly agreed to the middleweight bout.

Gastelum (15-6, 1NC) took part in the Fight of the Year in 2019, in a middleweight classic against Israel Adesanya for the division’s interim title. However, following that loss, the ex-welterweight has continued in a downward spiral, losing bouts to Darren Till and Jack Hermansson.

Ian Heinisch snapped his own two-fight skid earlier this year, when he finished Gerald Meerschaert by TKO within a round at UFC 250. That fight was thrown into turmoil during fight week, due to a false-positive COVID-19 test by one of Heinisch’s cornermen.

While that fight was saved, the Tiger Muay Thai fighter (formerly at Factory X) had to pull out of a June date with Brendan Allen, that was eventually rebooked for UFC Vegas 13 last weekend. While he was forced out thanks to COVID-19, hopefully the news of a fight with Gastelum will have Heinisch feeling a bit better.

The UFC’s January 30, 2021 date does not yet have a main event announced. It is expected to be a Fight Night card, although broadcast details have not been finalized. 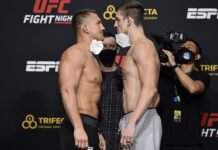 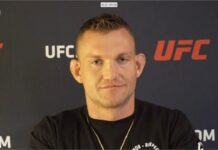