“The Alpha Ginger” may soon be returning to an octagon near you. Although the event is just a few weeks away, the UFC is targeting a featherweight showdown between Spike Carlyle (9-2) and Bill Algeo (13-5) for November 28.

MMA Junkie was first to report the news, which will see Carlyle entering the octagon for the third time this year.

The California native won big in his debut back in February at UFC Norfolk, finishing Aalon Cruz with elbows in the opening round. He came up short in his sophomore outing against fellow prospect Billy Quarantillo, however — and will be looking to get back on track opposite Algeo.

Bill Algeo made his own debut in the UFC back in August, stepping up on short notice against Ricardo Lamas. In what turned out to most likely by Lamas’ retirement fight, Algeo went the distance, losing a unanimous decision.

Algeo had previously competed for Cage Fury FC, and made an appearance on Dana White’s Contender Series. 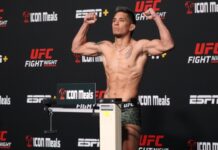 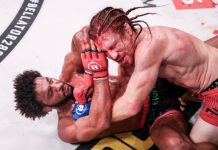