Glover Teixeira proved he’s ready for another shot at the title at UFC Vegas 13, eating huge shots from Thiago Santos but submitting him in the third round.

Thiago Santos looked to prove he’s still a top-tier light heavyweight following his knee injuries that sidelined him for a year at UFC Vegas 13 against Glover Teixeira. The fight had been scheduled twice in the previous two months, but both men took turns testing positive for COVID-19.

Santos was 4-1 at light heavyweight with three stoppages heading into the fight and the lone loss coming against Jon Jones. Teixeira was in the middle of a career resurgence, winning four straight fights with two submissions and a knocking heading into the main event appearance. The 41-year-old debuted in the UFC way back in 2012.

Santos was swinging bombs early, but Teixeira was staying diligently out of range. That is until the one-minute mark, when a right hand caught him on the temple and rocked him. Santos started pouring it on, with Teixeira falling forward while seeking a takedown. He was as persistent as ever, though, sticking to Santos like glue and fighting through elbows to take him down into mount. Santos bucked him into side control and Teixeira settled things down by keeping pressure on Santos. The fight eventually made its way to full guard with Teixeira peppering Santos with ground-and-pound. The round ended with Teixeira in half guard.

Off to a quick start in the #UFCVegas13 main event. pic.twitter.com/EgvwGIX613

Santos whipped kicks to the leg and body of Teixeira to start the round, then was caught with a right hand and promptly taken down. Teixeira reached half guard and postured up to drop some bombs on his opponent. Heavy elbows came down from Teixeira which opened a window for him to get to mount. He went there, but was quickly sent back to half guard. Teixeira moved to side control and dropped elbows on Santos. The one-sided round nearly was the end of the fight, as Teixeira took the back of Santos and sunk in a rear-naked choke, but Santos was saved by the bell.

Saved by the bell 🔔

The third round got off to a wild start. Teixeira shot for a takedown that was stuffed and Santos immediately dropped him with a straight punch. He jumped on with a barrage of punches, desperately trying to end the fight. Heavy shots found their way through, but like the first round, Teixeira fought through it to take Santos down against the fence. He quickly took the back, sunk in a rear-naked choke, and this time he got the tap. An incredible gutsy performance for Teixeira. 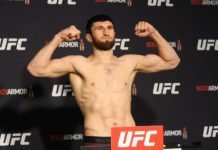 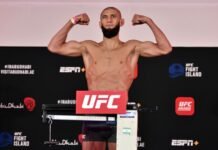