Jared Scoggins is one of the latest addition’s to Bellator’s growing bantamweight division. Unfortunately, his planned debut date at Bellator 250 this Thursday fell through at weigh-in, when his opponent missed weight.

Toby Misech has now missed weight in two consecutive fights, a concern we spoke to Scoggins about ahead of the event this week. At the time, he hadn’t even gotten wind of a catchweight, although a 137lb bout was eventually agreed upon.

“On my end, I haven’t heard anything about a catchweight,” he said Monday. “I’m professional, I come in, I’ll make weight, I’ll be there, and hopefully he’ll make weight.” No such luck. Despite that catchweight, Misech came in at a whopping 142.4lbs Wednesday morning. That resulted in the fight being pulled from the card — although Scoggins was paid.

Scoggin’s plan had been to get the win over Misech, then move on to some of the bigger names in the division. That won’t happen now. But he did shed some insight into his decision to sign with Bellator.

“I felt like after that last fight, I was going to get a call from the bigger promotions,” he told Cageside Press. That last fight came against Thomas Velasquez, and won Scoggins the Cage Fury FC bantamweight championship. “I have been keeping track of Bellator, and especially at 135, they’ve got a bunch of killers. I was interested to get here and see where I stack up with these guys.”

Among those killers are names like Juan Archuleta, Sergio Pettis, and the newly signed Brett Johns. Which could make for some very interesting match-ups down the road.

If the name Scoggins is familiar to you, you might remember his brother, Justin Scoggins, who did a stint in the UFC, and now competes for RIZIN FF in Japan. There were a lot of comparisons between the brothers when Jared’s signing with Bellator was announced. It’s not something that bothers him, however.

“Everyone’s always compared us. It’s nothing new,” he stated. “It’s a hard thing to follow, because my brother, he’s a killer. He’s definitely someone I look up to. But hopefully when people compare us, I get some good words in there.”

That family connection has helped the Scoggins brothers train during the pandemic, and all its associated restrictions. “My brother, he fights, I’ve got a cousin who fights, I’m still getting my training in any way I can,” he said.

In a way, the pandemic has brought back something of an old school feeling. “Back in the day when we were just kickboxing and going to karate tournaments, pretty much it was just me and [my brother] training together,” recalled Scoggins. “So it kind of does take me back to the old days.” 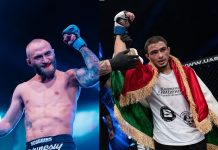 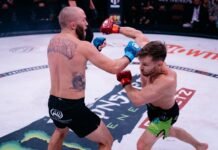