The fighting spirit seems to be running through the veins of the Mir family. Seventeen-year-old Bella Mir, daughter of the former UFC heavyweight champion Frank Mir, made her pro debut live on UFC Fight Pass on October 22. Just like her father, she happened to win her professional debut via unanimous decision against Danielle Wynn.

iKon Fighting Federation 2 gave Bella Mir the platform to showcase the skills she has earned in her blossoming career in MMA, taking on a women sixteen years her elder in the co-main event spot, which was an added pressure. Bella handled it well and took home her first victory as a pro.

Danielle Wynn, who also was making her pro debut, did well stifling any momentum the young Bella Mir looked to generate in the first round. It wasn’t until the second and third rounds where Mir got her grappling going, using the knowledge coming from her father who was in her corner. She even emulated her father’s submission legacy and attempted an arm bar late in the third.

The skills that Bella possesses at the young age of seventeen are very impressive. As a second-generation fighter, she’ll be one to watch as she moves on in her career. 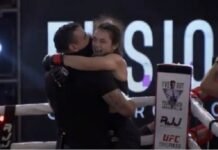