Abu Dhabi, UAE — Nour Al Harmoodi is the associate project manager on Fight Island. Which means she has been witness to all the excitement, craziness, and triumph of the UFC’s return to Abu Dhabi.

It also means she’s well aware of the logistical feat that the Fight Island team had to pull off to make the promotion’s return to the Middle East a success. Which included thousands of COVID tests for athletes and staff.

“I don’t know if you know this, but we’re about 2500 delegates all over the return to Fight Island right now, and we’ve performed 25,000 PCR COVID tests,” Harmoodi told Cageside Press ahead of UFC 254 on Saturday. “Honestly we’ve gone through a lot, it’s a long, long stretch, but we’re crossing the last mile today, and I think we’re all excited to see the finale, just watch it all happen, lay it all on the mat in the octagon today.”

The finale, the lightweight title unification fight between Khabib Nurmagomedov and Justin Gaethje, is something the Fight Island exec is excited for. Just like everyone else. But in addition to that, Harmoodi also believes that the Fight Island project has set the standard for large scale sporting events moving forward.

“I think what we’ve done for the return to Fight Island, and Fight Island in July, the incubation process, the quarantine process, I think it set a new benchmark worldwide on how to conduct global, world class sporting events,” suggested Harmoodi. “And I think that same kind of framework will be applied onward, for as long as the pandemic is happening.”

Given the success of the shows to date, it’s hard to argue against her. 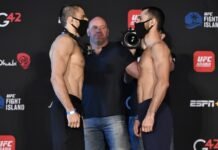 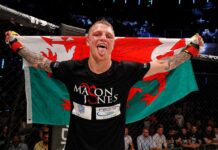