UFC 254 is a go, with weigh-ins for the event going down early Friday. The card is headlined by the reigning lightweight champ Khabib Nurmagomedov taking on the de facto number one contender (not to mention interim champion) Justin Gaethje. Also on the card is Robert Whittaker vs Jared Cannonier, which has all the makings of a number one contender’s fight for middleweight champ Israel Adesanya. Octagon newcomer Shavkat Rakhmonov, meanwhile, has been scheduled three different times and as of now, his opponent is Alex Oliveira (22-8-1 MMA, 11-6, 1 NC UFC).

Oliveira missed weight for the fight on Friday, but it will proceed as scheduled.

How will Rakhmonov fare in the UFC:

Shavkat Rakhmonov is an M-1 champion coming over to the UFC. He can either fall on his face like Khadis Ibragimov and Roman Bogatov. Or he can excel like Movsar Evloev and Damir Ismagulov. Where I think he will land in is right in the middle. I don’t think he’s a top talent but he’s well-rounded enough to find some success.

Rakhmonov has faced some good competition in his career, and has never fought anyone with a losing record. On the feet he has a good jab and is really good throwing his lead knee in the air like it’s a roundhouse kick. Rakhmonov is a diverse striker mixing up his attacks and while he’s not the quickest, he’s tough to read. His striking defense is a bit worrying though. In fights, his hands are low and his chin is high and that’s resulted in him nearly getting knocked out before.

When it comes to wrestling it’s questionable on both sides of the spectrum. Rakhmonov isn’t much of an offensive wrestler and struggles defending takedowns. Either on the top or on his back he’s at his best when using his jiu-jitsu. Rakhmonov hardly has any resistance to defending takedowns. He has a dangerous guillotine, will throw up a triangle, and with fluid hips will attack with armbars. On top of a good submission game, Rakhmonov has heavy ground and pound. At only 25 I believe we’ll see Rakhmonov in the UFC for a long time. He’s someone I can see havig a few setbacks early in his career on his way to becoming a much better athlete over the years.

How Rakhmonov matches up with Oliveira:

Fighting an opponent like Oliveira in your debut is a bit insane. Brazil’s “Cowboy” has nineteen more fights than Rakhmonov and actually has more wins than Rakhmonov has total fights. He’s been in the UFC for five years and has fought solid competition throughout. What Oliveira did in his last fight, winning with cage control and kicks from the outside, is what I see him doing here. He’s the better all-around fighter on the feet but he will have more success if he can get this fight down. Even in the grappling it’s not clear-cut for Rakhmonov. Oliveira is a good grappler and someone who has held his own against much better fighters. He has lost by submission a few times but to Donald Cerrone, Gilbert Burns, and Gunner Nelson. I like Oliveira here giving him an advantage on the feet and Rakhmonov probably fighting off his back if the fight does get there. 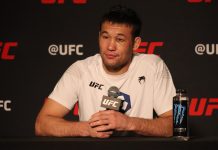