The UFC has a firefight lined up for the UFC Fight Island 5 main event, that being Marlon Moraes against Cory Sandhagen in an important bantamweight bout. Also on the card are Edson Barboza, Ben Rothwell vs Marcin Tybura, the return of Thomas Almeida, and a half-dozen exciting debuts. In a featherweight bout, Youssef Zalal (10-2 MMA, 3-0 UFC) was taking on Seung Woo Choi. Now that Choi is out Zalal will be fighting the debuting Ilia Topuria.

How will Topuria fare in the UFC:

Topuria is a top-tier level prospect and is one of the UFC’s best signings this year. He’s a Greco-Roman wrestler with a jiu-jitsu black belt who has surging striking. His grappling is his bread and butter and the wrestling to get to that point has been perfect.

On the feet, Topuria will throw a lot of twitches/feints and nicely time his shots slipping under a punch. Immediately when getting the fight to the mat he’s working to progress positions and working to finish. Topuria is a submission expert and just when you think he’s going for a rear-naked choke he’s going for a guillotine. When you think he’s attacking one arm he switches to the other. His transitions are seamless, he thrives in scrambles and is very good at attacking the back.

The submission expert has some pop in his hands, showing that in his last fight with a one-hit clean knockout. I love the way he comes forward with his hands ripping a nasty left hook to the body while throwing behind feints/level changes beautifully. We haven’t seen much of his striking but I’ve liked what has been seen. He’s still got some questions however. His chin is questionable, only being dropped once but hardly getting hit. Topuria has only been outside the first round once and although he looked good his cardio was hardly pushed. Lastly, as good as he looked it’s been mainly against low-level competition. Still, with all the questions I think he’s got the “it factor” and I think he has that star potential.

How he matches up with Zalal:

Zalal is a well-rounded fighter who is dangerous on the feet and the mat. On the feet, he excels at range with excellent lower calf kicks and a long jab. Zalal has solid jiu-jitsu and even though his takedown defense needs improvement he is dangerous off his back. He has long arms which plays a large part in why he’s so dangerous attacking the neck. Zalal has been tearing it up in the UFC with three wins in the span of seven months. To be fair, I’m positive Ilia would beat Griffin, Lingo, and Barrett as well. It’s safe to say each other are the biggest test in their respective careers. Even though I think Zalal has a bright future he’s had a few glaring holes. Most notable is his takedown defense needing work. Having that issue against a guy like Topuria will get you smoked. Zalal also has below average striking defense that will have Ilia very live in the striking. I like Topuria in this fight as he has a clear path to victory. 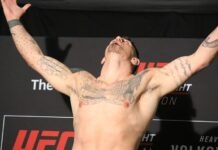 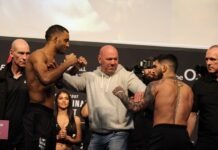