Mads Burnell’s UFC run felt like it ended a bit prematurely. The 26-year old from Copenhagen, Denmark fought three times in the octagon, posting a 1-2 record prior to his release. Since his exit from the organization in 2018, however, Burnell (13-3) has won fought straight, claiming the Cage Warriors featherweight championship in the process.

This weekend, Burnell is back in the big leagues, having signed on with Bellator MMA. He’ll make his promotional debut at Bellator 248, a historic card ushering in legalized MMA in France. During the event’s media day this week, Burnell gave some insight on why he opted to jump to Bellator, even though other promotions, and even a UFC return, could have been possible.

“To be honest, I’ve been hot for Bellator for a couple of years. It was natural, and the opportunity was there. It was just natural. It was perfect,” said Burnell, who would later add that he believed Bellator to be “a super-cool promotion.”

That’s due to both “the production, and the fighters,” Burnell explained. “It’s not even something I say just because I’m signed with Bellator, but I’ve always had my eyes on Douglas Lima, the Pitbull Brothers, Michael Chandler, all those guys. I was like, ‘yeah man.’ It feels like the right thing, and it’s natural. It feels like the right move to do, and here I am.”

Then there’s the inroads Bellator has made into Europe in the past couple of years. Despite having the biggest European fighter in MMA history in Conor McGregor, the UFC has more or less neglected the continent, from the U.K. to the mainland. A yearly trip England, occasional stops in Ireland, Sweden, and a handful of other countries. Little in the way of consistency.

Bellator, on the other hand, has invested heavy in Europe, heading to London, Dublin, and Milan on a regular basis. During the pandemic, they managed to hold three cards in Italy, at Milan’s Allianz Cloud arena. This weekend, they arrive in Paris, beating the UFC to the punch in France. It’s a big enough deal that the BBC will broadcast mixed martial arts for the first time in history, on their iPlayer service.

“I think to be honest it’s a very good match. Bellator is going big in Europe, and I’m a pretty big name in Europe,” Burnell told Cageside Press. “So it’s a great match.”

When it comes to his turnaround, and struggles during his UFC run, Burnell noted that “martial arts, MMA, is a learning process.”

The featherweight, who faces Darko Banovic in his Bellator debut, also took some time to talk about his favorite submission: the Japanese necktie:

“People stick their head out, and I take their head home with me. It fits right into my game. It’s a good submission, and a very underrated submission as well.” Burnell believes, in fact, that if more people trained the submission, they would find it “super easy to implement in their game.”

With four wins by way of that particular submission, it’s clearly been easy enough for Burnell.

Watch the full Bellator 248 media day scrum with Mads Burnell above. The event goes down live this Saturday, October 10. 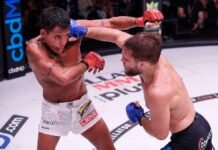 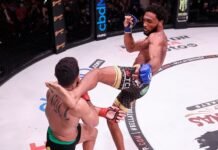 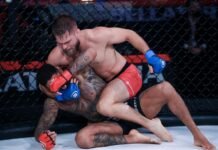