Luigi Vendramini started off the UFC Fight Island 4 card with a bang, knocking out Jessin Ayari in the first round.

UFC Fight Island 4 went down Saturday night in Abu Dhabi, and the card opener was a battle of returning fighters. Both Tunisia’s Jessin Ayari and Brazil’s Luigi Vendramini had been out of action since 2018. For Ayari, his last fight had come in Moncton, New Brunswick in Canada, a loss to Stevie Ray. Vendramini, meanwhile, was coming off his debut, a loss to Elizeu Zaleski dos Santos in Sao Paulo, Brazil.

Ayari started off with pressure, immediately. Looking to land a big combination in the opening seconds, he put Vendramini on the backfoot quickly. However, it was Vendramini who landed the first big shot of the fight, with a huge left hook that rocked Ayari. Vendramini followed up with a huge combination including multiple clean right hands,. However, it was the picture-perfect head kick that dropped Ayari. Vendramini followed up with some ground-and-pound but the damage was done, and the fight was over after a few follow-up shots. What a knockout by Luigi Vendramini.

RELENTLESS! What a start to #UFCFightIsland4 as @VendraminiLuigi gets the quick finish!!

Luigi Vendramini was looking to rebound after a tough loss in his UFC debut and then having to heal up after multiple injuries leading to his hiatus. He more than made up for the lost time, beating Ayari in the first round. The impact of his journey back to the Octagon was on display after the knockout as he ran around the cage screaming at the top of his lungs. 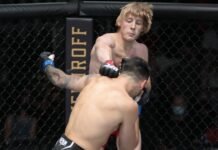 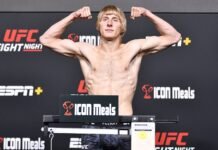 Welcome to the UFC: Paddy Pimblett