Two champions, including the UFC’s most recent, were among the bonus winners at UFC 253. And the Fight of the Night went to a short but dazzling thriller.

The PPV card kicked off the promotion’s return to Fight Island in Abu Dhabi on Saturday. And it was the final three fights of the evening that took home all the bonus money.

In the co-main event, Poland’s Jan Blachowicz fought a smart game plan, targeting Dominick Reyes’ body with kicks and keeping the pressure up. Reyes was in the fight but falling behind when a second-round TKO sealed the deal, and made Blachowicz Poland’s second UFC champion following Joanna Jedrzejczyk. He’s now the first light heavyweight champ in the promotion since 2011 not named Jon Jones or Daniel Cormier.

That performance was followed by a return to form in the main event, as middleweight champ Israel Adesanya put on a stunning show against Paulo Costa. The Brazilian aped Adesanya’s flashy style, but that didn’t help him eat leg kicks any better. Or head kicks. Or the final ground n’ pound blows following a knock down, which finally sealed the deal in the second round.

Those two fights were preceded by Brandon Royval vs. Kai Kara-France in a balls-to-the-wall, lightning fast flyweight affair that saw both fighters hurt. Royval was clipped early, but a spinning back elbow rocked Kara-France and likely saved Royval’s bacon. “Raw Dawg” got better as the fight went on, landing spinning attacks and knees before submitting Kara-France in the second with a guillotine choke.

The action-packed affair was awarded Fight of the Night. All four fighters will take home an extra $50,000 for their efforts. 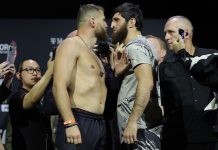