After picking up a huge win in his UFC debut against Tim Elliott, Brandon Royval (11-4) returns for his sophomore outing at UFC 253 on “Fight Island” this weekend. And he’s still just a little bit on cloud nine.

“Unbelievable. Like a dream come true for sure,” he stated, describing the feeling of being in the UFC at this week’s UFC 253 virtual media day. “I feel like I just keep getting surprised by it all. I’m just trying to take in all these moments and enjoy it.”

The biggest challenge thus far for Royval (11-4), in fact, has been recognizing that yes, he belongs with the top flyweights in the world. It’s a struggle for self-acceptance, really. Because anyone watching knows that yes, the former LFA flyweight champ most certainly does belong.

“I’m still trying to continue to accept it, just that I belong here. That I belong here, that I’m right where I belong. That I’m one of these guys, I’m a top ten fighter, I’m in these ranks, and I deserve to be here,” he said of that continued struggle for acceptance. “I feel like that’s the hardest part for me to accept — hey, you deserve to be here. I didn’t take an easy route to the UFC at all. So now that I’m here, I want to be here, I want to make a name for myself, I want to show my worth out here and show what I can do.”

This weekend, Royval takes on Kai Kara-France, a member of City Kickboxing and teammate of Israel Adesanya, who throws down in the main event. Is Kara-France being part of that surging team a little bit of extra motivation, perhaps?

“I don’t know if it’s motivation. I feel like any other kind of situation, I’d probably be going for the champ,” replied Royval. “But it’d probably be beneficial to me to mess up the champ’s night right before he goes in there. It’s not like motivation, but it is one of those things where I’m going to try to have to mess up the champ’s day right before he goes out there and fights.”

As to Kara-France himself, Royval is a fan, and liked him on The Ultimate Fighter. “I like him, I like his style, I like what he brings,” said Royval. “He’s really good, really technical, but he’s not going to keep me guessing. I feel like I’m going to be able to see everything he has coming.” 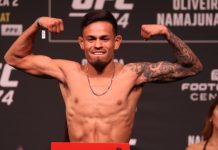 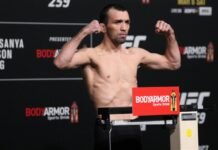