Hakeem Dawodu entered the UFC one of the hottest Canadian prospects in years. The undefeated fighter stepped into the octagon for the first time in 2018, against Danny Henry at that year’s UFC London card — and was quickly submitted.

MMA fans being a fickle bunch, Dawodu was ruled a bust rather prematurely. Four straight wins later, however, and it’s clear the sky is the limit for “Mean” Hakeem. He just needs that signature win over a big name.

Enter Zubaira Tukhugov at UFC 253. The Russian fighter is a close friend and teammate of lightweight champion Khabib Nurmagomedov. While his recent record is just 1-1-1 since 2015, the name value might be enough to push Dawodu into the rankings.

“I know he’s got a really big name, I know this fight can skyrocket me and excel my name and get me into that top ten, start getting ranked,” Dawodu told Cageside Press at the UFC 253 virtual media day this week. At the same time, however, the Canadian is treating the fight like any other. “It’s the same as always. Same office, working just as hard, training just as hard, and I’m ready for the task at hand.”

“The featherweight division is one of the deepest, I think is the deepest in the UFC. But at the same time, I’m a shark,” stated Dawodu. And observers should not judge the fighter on his MMA record alone. “I’m on the same level as these guys if not better. This is my 71st fight coming up. I’m a former world champion kickboxer, I was the best amateur decorated kickboxer there was. So there’s nothing I haven’t been through, nothing I can’t handle.”

Dawodu, however, has been on the shelf a little bit. His last fight was a win over Julio Arce, at UFC 244 last November. What’s kept him idle, in terms of actual fights, has been the pandemic.

“Honestly just the COVID man. I was one of the few people who had the keys to my gym, so I was training all through. I was ready to fight, and I had a couple people turn down a couple opportunities to fight me,” he revealed. “This was just a thing that came up, so I took this opportunity, and here I am right now, I’m ready to perform, I’m ready to start getting this title run going.”

Lucky for Dawodu, his camp itself hasn’t really been impacted by the coronavirus, at least not recently. “In the beginning, before I even had a fight coming up, it was hard to get training partners, just because everything was on lockdown. But the last three, four months, it’s been perfectly normal,” he explained. That has allowed Dawodu to bring in his usual line-up of wrestlers, boxers, Muay Thai specialists, BJJ experts, and MMA sparring partners.

And should in turn mean he’s more than prepared for Tukhugov this weekend. 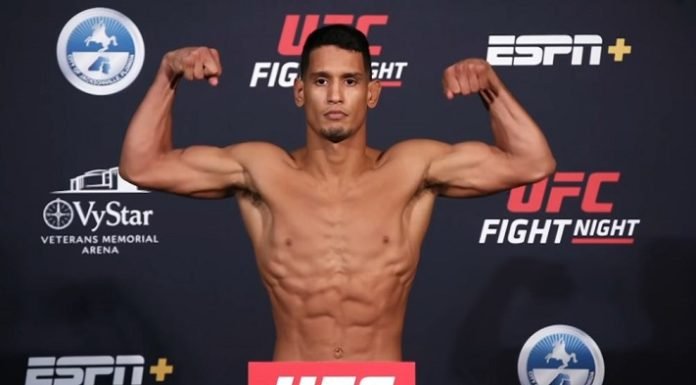