Entering UFC 253 this past weekend, Brad Riddell was looking for a shorter night at the office. That, after a couple of extended wars in “Quake’s” first two bouts in the octagon.

He didn’t get it. Instead, it was another 15 minute tussle, this time with Alex Da Silva. But Riddell came close to a stoppage — only to have the bout paused after a clean punch was mistaken for an eye poke.

“You can see that I was a little bit annoyed, but that’s okay, because he stopped. If that was deemed as a punch as the time, I would have stopped and I would have finished him and I would have got a stoppage on my record, which would have been awesome,” Riddell said following the bout, speaking to media outlets including Cageside Press. “I think it would have been one of the first times he’d been stopped, if not the first.”

Riddell, however, took a laid back approach to the outcome. “That’s the way the universe swings today, so that’s okay. I still got the win. It’s not the ref’s fault, it’s very hard to see what’s going on in there sometimes, especially when people are just trying to keep their employment. So it is what it is. I can live with that.”

After a rough first round that included finding himself caught in a tight guillotine choke, Riddell adjusted well between rounds. His corner, he recalled, “just said I had to win the next two rounds. I sacrificed that first round to tire him out on the wrestle. It was very hard to get him off me. I’m not saying I strategically let him put me there, he put me there himself because he was strong. And it was hard to get him off.”

Aside from the need to win the next two rounds, Riddell’s corner encouraged him to stick to the game plan. No doubt easier said than done after watching “one of my homeboy’s get knocked out.” That would be Shane Young, who fought shortly before Riddell. “It’s never fun, it hurts. To block that out is an experience.”

With three wins in a row in the UFC, you can expect Riddell to be looking up the ladder in the lightweight division. “I’m going to go home, get on the Google machine, find somebody, start yelling at them, pick a fight with them,” Riddell joked about what comes next. 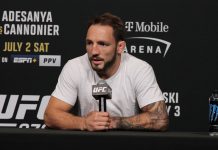