Andre Ewell and Irwin Rivera had a fun bantamweight scrap on the prelims of UFC Vegas 11, with Ewell picking up a key split decision win.

Former CES MMA bantamweight champ Andre Ewell was 3-2 inside the octagon entering UFC Vegas 11 on Saturday — and looking to put together back-to-back wins for the first time in the promotion, opposite Irwin Rivera.

“The Beast” was also looking to make it two straight, after splitting his first two bouts in the UFC. In the end, it was Ewell with his hand raised.

Ewell opened up with a sharp left hand, appearing to be the faster of the two fighters early. Rivera looked for a head kick but was blocked, but he did respond with a hard low kick. Rivera landed a hard right hand then followed by a leg kick, only to fall after the kick. Ewell landed a hard right hand that landed flush and Ewell looked for a big combination punctuated by a flying knee. Ewell began to walk down Rivera, throwing lots of feints and shots to the body. Rivera was doing his best to walk through the shots, but Ewell did get Rivera’s back after Rivera shot for a takedown but was stuffed. Rivera ended the round on top however, after finding his way to full guard.

Ewell began round two with constant pressure once again, throwing lots of kicks to the body and many feints. Rivera responded with a superman punch after Ewell winged on a left hand, however Ewell landed a combination ripping to the body afterward. Ewell began working his jab to good effect, and Rivera began to rip to the body himself, landing a four-shot combination. Ewell had another strong round in round two and was the more accurate fighter. Leading him to likely be up two rounds to nothing heading into the third round.

Ewell seemed to be slowing down in the opening moments of round three, but he still was throwing hard. Rivera looked for a head kick to start the round but missed, Ewell kept jabbing away trying to keep Rivera on the outside. He also continued his ruthless body assault, before starting to hunt upstairs. Landing a clean right hand that got Rivera’s attention. Rivera responded with a couple of clean jabs, then a hard right hand following a missed spinning back kick by Ewell. Rivera began coming on strong in the final minutes, pushing the pressure and trying to get the finish. He kept looking for the overland left but was countered by a right hook by Ewell. Rivera landed a big combination then got a huge first takedown in the final seconds of the fight. That was too little, too late however — at least on most of the scorecards. 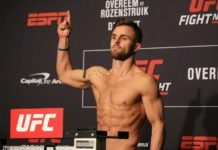 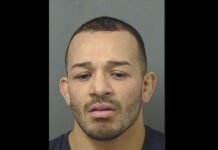