The UFC has secured the rights of the biggest free agent on the market: Michael Chandler.

On Thursday, UFC President Dana White told ESPN’s Sportscenter (h/t Brett Okamoto) that the promotion had inked a deal with the former Bellator MMA lightweight champion. In addition, White revealed that Chandler would serve as the back-up fighter for Khabib Nurmagomedov vs. Justin Gaethje at UFC 254 in October.

That’s big news. Earlier in the week, reports surfaced suggesting that Chandler might be linked to a fight with Tony Ferguson on that very same card, after talks between the promotion and Dustin Poirier fell through.

Ferguson publicly campaigned for the UFC to pay Poirier. What Chandler’s signing means for that fight, and when he’ll actually compete for the UFC, remains to be seen.

Chandler (21-5) is best known for a pair of wars against Eddie Alvarez in Bellator MMA, which would go on to become all-time classics. As well as for multiple reigns in the promotion’s lightweight division. The 34-year old had hit free agency before, but stayed loyal to the company. However, nearing the end of his prime, it felt as if it was now or never if Chandler wanted to jump ship and fight some of the best lightweights outside Bellator.

In the UFC, he’ll have the likes of Khabib, Gaethje, Ferguson, Poirier, and Dan Hooker to contend with.

Chandler lost the Bellator lightweight championship last year, after he was finished via TKO by Patricky Freire’s brother Patricio. He then bounced back with wins over Sidney Outlaw and Henderson. 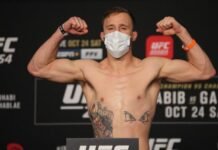 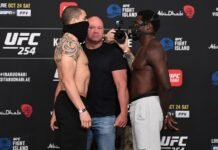