In Michael Lombardo’s first appearance on Dana White’s Contender Series, he began the fight by aggressively throwing strikes, with his opponent, Kyle Daukaus defending well before returning some strikes of his own. Lombardo shot for a takedown and was eventually denied, essentially setting the tone for the fight to come. After another failed takedown attempt, Lombardo narrowly escaped a submission and was taken down by his opponent to close out the first round.

During the second round, Lombardo’s opponent again was able to defend against his takedowns initially, before eventually being taken down. Daukaus threatened with submission attempts while being taken down, on his back, and all the way up until the end of the round. It was apparent that Daukaus had the edge in grappling.

In the third round, Lombardo was immediately taken down and constantly threatened with submissions throughout the entire round. Lombardo showed great resiliency and grit to survive these submission attempts to ultimately lose a lopsided decision — with scores of 30-25, 30-26, and 29-27.

Michael’s opponent on the Contender Series, Kyle Daukaus, improved his record to 7-0 as a result of their fight. But Dana White ultimately decided not to offer Kyle Daukaus a UFC contract on that night. Michael went back to fighting for the CFFC organization for two more fights, resulting in two more finishes. Then, earlier this year in June, Daukaus answered the call up to the UFC and got to take on Brendan Allen, who was sporting a 14-3 record coming into the bout. Though Daukaus ended up losing the fight, by way of a unanimous decision, he already has another fight booked in the UFC against 13-1, Dustin Stoltzfus.

Since his first appearance on the Contender Series last year, Michael Lombardo has fought 3 times.

Less then two months after his fight on DWCS, Lombardo took on Justin Thornton who entered the bout with a 6-16 record. Michael got through his opponent quickly, finishing him by submission via arm-triangle choke in the first round.

Fast-forward another couple months and Lombardo took on Hugh Pulley, who entered the bout with an 8-4 record. This bout would end up being declared a no contest.

The last time Michael competed was earlier this year in late January when he took on Jose Caceres who entered the cage with an 8-4 record. Lombardo was able to successfully secure a unanimous decision victory.

Korey Kuppe is a dangerous and experienced fighter. Kuppe stands at a towering 6’5″ tall and will also have a reach advantage with his 75″ reach.

The combined records of the opponents that Korey Kuppe has faced coming into his fight on Tuesday night with Lombardo is 23-33.

Kuppe has finished all 8 of his fights and 7 of them have been by way of submission. Korey also has finished 6 of his opponents in the first round and he is a very dominant ground fight with even his lone TKO win being from elbows while he was in the triangle.

Michael has more experience and has faced more experienced competition than his opponent. Michael also has good submission defense and the power to stop the fight with either his striking on the feet or submissions on the ground. 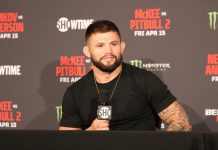 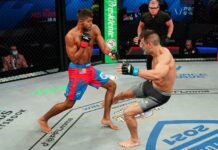