Every fighter is asked about it, some have even had it filmed and shared on social media. The call from a manager with an offer from the Contender Series, a fight that could change the trajectory of their career and even their life.

For New England’s Dinis Paiva, that call took a while to arrive. Paiva took his first fight at Cage Titans 1 over ten years ago. He turned professional less than a year later at CES 6, which is the only organization he ever fought for in his professional career. So when that call came from Tyson Chartier, it’s not surprising that it was an emotional moment for him.

“It’s definitely been a long road. I’ve been in the game for quite some time — a lot of ups and downs, a lot of good times and a few bad times,” Paiva said. “But to be at this level or be getting this kind of opportunity after everything I’ve been through throughout my career and throughout my life, it’s really a blessing. I’d be lying if I said I didn’t shed a few tears.”

However, unlike what you hear in the sixty-second promos that air before the fights, Paiva isn’t going to tell you this was a lifelong dream of his. In fact, this dream didn’t even start when he started MMA.

“It’s actually the opposite. When I got into MMA, I really was just kind of doing it as a hobby. I just loved it, I actually like competing,” he reflected. “I just wasn’t surrounding myself with the best people I could at the time. I think I always kind of had the talent and the ability, it just wasn’t structured.”

The lack of structure and not surrounding himself with the right people led to a rough start to his pro career. After winning his debut, he would lose 5 of his next 7 bouts. Although close decisions and a DQ were in the mix, the style of training and the results had Paiva ready to pack it in.

“I trained individually out of a garage for the first half of my career and obviously my record kind of reflects that,” he said. “At 3-5 I was ready to hang up the gloves and just do away with it.”

It was right around that time that Paiva had begun to work with a local legend. In talking with him, he was inspired to give the fight game a more legitimate try and the results were immediate.

“Mike Gresh, aka Loco Lobo, he kind of got into my ear and told me I had all of these different attributes and assets that could really get me to the next level. I just needed to put things together and he was that guy who did that,” Paiva stated. “I started from scratch all over again and I started surrounding myself with a professional team and doing the right things. Winning started coming and it came in pretty dominant fashion.”

Since that time, Paiva has a 10-2 record, which includes 7 finishes and a win over UFC veteran Jordan Espinosa. The overall record might be something that has scared the UFC away in the past, as 13-7 seems nothing to write home about when you view it in isolation. Paiva knows, however, that the journey is part of what makes him who he is today.

“It’s been a long learning process of growth and development — growing from a 22-year old man-child to a 32-year old man. I’m just really thankful for this opportunity, but I also know I got it with hard work,” he said. “My manager reached out about a week and a half ago, just kind of to tell me that stuff was going haywire in Vegas and to stay ready. I let him know that I was doing everything I could to stay active in the gym so to keep me in the loop and if anything came up, I’d be by the phone and ready to go. So he kept throwing my name in the hat and eventually Sean Shelby bit down.”

He’ll get one more chance to try to get Sean Shelby to take a bigger bite on Tuesday September 15 on week 7 of the Contender Series. Paiva is scheduled to face Kyle Driscoll. 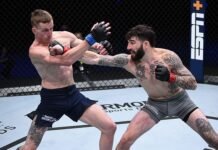