UFC Vegas 9 was originally set to take place with ten bouts on the card. Due to positive COVID-19 tests, Thiago Moises and Marcos Rogerio de Lima were both pulled from the event last minute, while Karol Rosa was forced off due to weight cutting complications. That forced the event to move forward with just seven fights. Today we will be looking into what is next for the losers of UFC Vegas 9.

In the main event of UFC Vegas 9, Alistair Overeem was able to get a TKO win over Augusto Sakai in the fifth and final round. Sakai was out-striking Overeem in rounds one through three. In the third round, Overeem landed a takedown and started working his ground and pound. He followed up by doing the same thing in rounds four and five.

It would be great to see Sakai fight another heavyweight with elite-level boxing in his next fight. With that being said Junior Dos Santos is currently on a three-fight losing streak but is still ranked two spots ahead of Sakai. Dos Santos doesn’t normally go to his wrestling which means we would see a bunch of world class boxing in that fight.

Alonzo Menifield lost via knockout against Ovince Saint Preux at UFC Vegas 9. Menifield looked to be the quicker and faster man in that fight. He just never found a way to let his hands fly. When he finally started to open up with his striking he got caught with a big shot and got knocked out.

Michel Pereira dominated Zelim Imadaev for three straight rounds before submitting him in the final round. Pereira showed a much-improved version of himself as he took his time with his striking. After his win, Pereira called out Jorge Masvidal for the BMF title.

Zelim Imadaev, meanwhile, has now lost three straight fights. He’s in a real rough spot moving forward, and under normal circumstances might be shown the door. However, pandemic era MMA is anything but normal circumstances, so the UFC might decide to give Imadaev one more fight. If that is the case, Dwight Grant, who just recently came up short against Daniel Rodriguez, could work. The timing is right, and Grant is 2-2 in his last four.

Montana De La Rosa has been trading wins and losses recently. At UFC Vegas 9, she came up short against Viviane Araujo, losing a unanimous decision. At 2-2 in her last four fights, De La Rosa is pretty much just holding her ground in the flyweight division.

Another young star, Gillian Robertson, is facing the returning Poliana Botelho next month. Whoever comes out on the wrong end of that fight might be a good option for De La Rosa, who has a decent ground game. 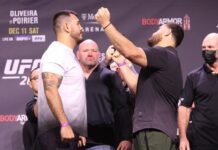 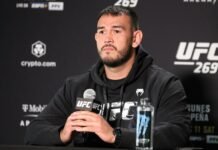