The UFC’s final card of the month, UFC Vegas 8, was supposed to be topped by featherweights Zabit Magomedsharipov and Yair Rodriguez. However, with that bout reaching Khabib vs. Tony levels of bad luck, it’s now light heavyweights Anthony Smith and Aleksandar Rakic throwing down in the main event.

A three-round main event, due to the short notice nature of its promotion.

Smith was last seen being absolutely mauled by Glover Teixeira back in May. Rakic, meanwhile, is coming off a controversial loss to Volkan Oezdemir at UFC Busan last year. Despite that L, he’s getting a step up in competition at UFC Vegas 8, at least in terms of ranking. Smith is the 5th ranked heavyweight in the division — which recently saw Jon Jones vacate his title.

Dominick Reyes and Jan Blachowicz will battle for the belt next month. In the meantime, either Smith or Rakic can get back into contention with a win Saturday.

Weigh-ins for the event are set for Friday at 12PM ET — check back then for updates.

Two fighters missed weight Friday — Hannah Cifers, who hit 117lbs on her second attempt, with the barrier, and short-notice fighter Austin Springer. He came in at 151lbs, well over the featherweight limit, for a fight with Alex Caceres. Both fights, however, will proceed.

* Cifers missed weight by 1lb, will forfeit 20% of her purse, fight moves forward at a catchweight

** Springer misses weight by 5lbs, will forfeit 30% of his purse, fight moves forward at a catchweight 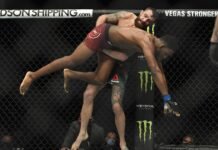