Las Vegas, NV — UFC bantamweight Marlon Vera was relishing the feeling of bringing the “Sugar Show” to an early end at UFC 252.

“It’s a sweet feeling. It’s making history for me, for my country. Not just the first Ecuadorian fighting for the UFC, but making big moves in a co-main event, and finishing somebody that everybody was talking about and had all the media behind him,” Vera said Saturday following the bout.

“I don’t buy any of that bullsh*t,” he said of the hype “Sugar” Sean O’Malley had behind him. “To me it’s all about work hard, and fight hard. When the cage is locked, it’s when I’m having fun, when I’m letting go. I’m happy, I’m in good spirits, and I can’t wait for the next one.”

Yes, the fight ended with some controversy. O’Malley suffered a leg injury. He was in essence a lame duck when Vera (16-6-1) put him away. But how he came about that leg injury is another matter.

“I see myself as a very good kicker. That’s how I started my career, I was throwing a lot of kicks back in the day. Now I’m putting it together, my boxing and everything. But now, watching the video, I threw a hard calf kick. And after I threw the calf kick, his nerve— sh*t happens,” Vera exclaimed. It is, he pointed out, “the same way [Michael] Chandler [lost] to [Brent] Primus.”

The end result was certainly the same. Whether O’Malley gets another crack at Vera, as Chandler did against Primus, remains to be seen.

“Chito” continued by saying “he kicked me really hard in the leg. My shin is just harder than his.” And when it comes to the stoppage, “the guy wasn’t arguing,” Vera added. “When I landed the second elbow, he wasn’t making noises. He was out.”

Vera now believes that he’s a solid top ten fighter in the UFC’s bantamweight division. “I’ve been making damage in the division,” he told media outlets including Cageside Press on Saturday. “What happened in the last fight [a close decision loss to Song Yadong] got me pretty upset, got me angry. And actually made me [do] what I did tonight.”

Post-fight, Vera revealed that he took some inspiration from UFC broadcaster and podcast host Joe Rogan. He expanded on that with the media, backstage at the UFC Apex.

“The way he talks about inspiration, motivation, hard work and stuff like that, that’s something I really admire from him,” said Vera. “He seems to be a pretty solid guy, and when he talks about things like that, he’s a really good motivator. The way he says ‘conquer your inner bitch, push yourself.'”

There’s one episode involving Rogan that Vera feels very much speaks to who he is, however. “I remember a long time ago, they talked about the immigrant mentality. I capture that pretty good, that’s me right there,” he pointed out.

“Coming from a small town in Ecuador, moving to California, my whole family. Buying a house, keep going forward, trying to achieve my dreams, and keep my family safe and happy — those things [are] what I am,” Vera continued. “I’m an immigrant, and I’m somebody who came to this country to take advantage for good, not for the bad, and just work hard. Working hard will always pay off.” 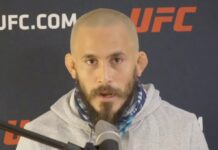 UFC Vegas 17: Chito Vera Believes Jose Aldo Has Slowed, but “You Cannot Count Him Out”

Welcome to the UFC: Mason Jones