Charlie Campbell stepped in on ten days’ notice to fight Nainoa Dung in the Bellator cage at Bellator 243. A winner via vicious leg kicks which ended the fight early, Campbell surprised many, but not himself with this big victory. Campbell spoke of his emotions post fight, speaking to media outlets including Cageside Press.

“I guess it still hasn’t even hit me,” Campbell told the press post fight. “I got this fight ten days ago, I raised my hand for the opportunity and I’m glad they took me up on it and took me seriously.”

Campbell is now 2-1 in his young professional career. He spoke of competing on a stage such as Bellator’s as being a dream, but when asked if he would like to return, Campbell said that it needed it to be worth it.

When asked if the leg kicks used to end the fight were something seen in footage or something seen in the cage mid-fight, Campbell stated it was something he picked up mid-fight. A changed game plan using the fight IQ is impressive for someone with only three professional bouts, but Campbell has been training since childhood.

“It presented itself along the way,” Campbell told the media. “I knew he’s primarily a striker, and it was available. I made an adjustment in the moment.” 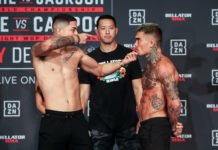 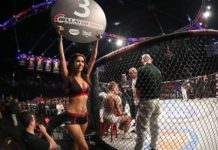