Aaron Jeffery will lock horns with Bruno Assis at SFT 23. The middleweight bout goes down at Wynwood Studios in Wynwood, Florida on Thursday, August 13. The card is available on pay-per-view via FITE TV and begins at 7PM ET. Standout Fighting Tournament is a promotion based out of Sao Paulo, Brazil, and are making a foray into the United States for the first time here with their 23rd event.

Jeffery is represented by Dodge Sports and they navigated a number of potential fight options for him before coming to this SFT 23 booking. “My manager has been in talks with a few different promotions. We tried for CFFC, LFA, a couple other ones.”

The BTC middleweight champion has history training at Niagara Top Team and Parabellum MMA. While the cast of characters remains the same, it comes with different circumstances at play. “It’s minimized groups right now for sure,” he told us. “None of the gyms are officially open. So it’s kind of like a bunch of the pros kind of figuring out their own times. Minimizing the risk of coming in contact with way too many people you know.”

“I see Lyndon (Whitlock) a couple of times a week. We do our kickboxing and pad sessions. I’ve been with Rory McDonell again lately working some jitz,” he continued. “I live with my wrestling coach Chris Prickett. The owner of Niagara Top Team. So I get in lots and lots of work with him multiple times per day.”

Mike Malott is one fighter in particular that Jeffery has been getting in some quality work with in recent times. “Yeah, he’s awesome, he’s a great partner for me. He’s a 45er but he hasn’t fought in a bit. He’s a big dude right and now he’s about 190. So he’s a good size for me and his skill level is awesome. He’s been showing me a lot.”

The lockdown downtime earlier in the year allowed Jeffery to both heal up physically and refresh his mind. “When all this COVID stuff like initially went down, I was trying to be as safe as I could. And I actually did take about four weeks off training. I was just at home and pretty much all I had was like a 50 lb kettlebell, an airdyne bike, a punching bag that I had to hang up on my tractor at home. So yeah that was a sketchy four weeks of training.”

Jeffery will be going down a bit early to do COVID-19 testing before the fight and will also do a test prior to traveling to Florida. Also, while Aaron Jeffery isn’t personally studying tape on Bruno Assis aggressively, he is still familiarized and is focusing on what he needs to do in his own preparations to be ready.

“I’ve only watched the one fight so far. The Contender Series fight. My coaches have watched a couple of the other ones and it’s kind of similar to what we saw on Contender Series,” he observed. “Good Jiu-Jitsu guy, got a bunch of wins by submission, he’s a black belt. So I’ve got to be careful of that but I think it’s a good fight for me.”

Canadians on the Contender Series

There are multiple Canadians on this upcoming run of Dana White’s Contender Series like TJ Laramie and Anthony Romero. With Jeffery having been the first Canadian in Contender Series history, it’s something he seems to quite enjoy seeing this 2020 season.

“I think it’s gonna kind of shine some light on all the talent in Canada. I train with Romero all the time. So you know if he gets into the UFC after this fight, it’s kind of like an in for our gym, now we have another connection to the UFC,” Jeffery said. “So I think it’s awesome.”

Jeffery has an obvious level of composure when competing but cornering certain people can be quite stressful for him.

For more with Aaron Jeffery check out the full interview right here! 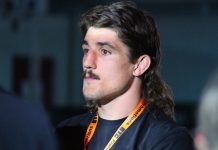