Andrew Sanchez picked up an impressive win on the UFC Vegas 6 prelims, knocking out Wellington Turman in the first round.

Ultimate Fighter winner Andrew Sanchez took on Brazil’s Wellington Turman in middleweight action at UFC Vegas 6 on Saturday. The fight saw “El Dirte” Sanchez looking to bounce back from a loss against Marvin Vettori in his last outing back in October of last year.

Turman, for his part, entered the fight off his first win in the promotion, over Markus Perez last November. Overall, he was 1-1 inside the Octagon to start the night.

Turman started off quickly, throwing a jumping front kick before Sanchez got the fight into the clinch. Sanchez pushed Turman into the fence and landed some knees to the body before circling off. Turman landed a hard right hand followed by a low kick, and Sanchez responded with two nice left hooks of his own. Turman looked to land a head kick but missed, and Sanchez landed a hard right hand on the ear of Turman. Sanchez found a home for the right hand early, landing many quick straights to the Brazilian in the first round. Near the end of the first round, Sanchez found a home for the right again and put Turman out cold! Sanchez landed a counter right straight and knocked Turman out. A couple of follow up strikes later, and “El Dirte” had the most impressive win of his career.

It’s hard not to be impressed by Sanchez and how his career has progressed. From entering the UFC as a green wrestler who was uncomfortable on the feet, to outstriking great fighters and developing an impressive striking game with a wrestling pedigree to fall back on. Andrew Sanchez is going to be a problem. 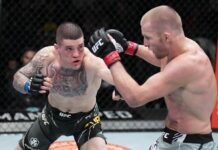