UFC bantamweight and former flyweight title challenger Ray Borg is no longer with the promotion.

Following his withdrawal from UFC Vegas 5, where he was expected to face Nathan Maness, Borg has been dropped by the organization. It was the second straight withdrawal for Borg, who was also forced to pull out of the UFC on ESPN 10 card due to his young son’s health issues.

MMA Fighting was first to report the news that Borg had been cut. It’s the latest wrinkle in a troubled fighting history for the 27-year old, who has dealt with some serious bad luck over the years.

Borg’s son was diagnosed with hydrocephalus in 2018. The rare brain condition required multiple surgeries, with complications continuing to this day. That same year, he suffered an eye injury as a result of Conor McGregor’s bus attack ahead of UFC 223 in Brooklyn.

Since then he has pulled out of fights for numerous reasons including his son’s health, struggled with his weight (missing the mark at both flyweight and bantamweight), coped with injuries and watched as the flyweight division he once challenged for gold in nearly fell apart around him.

Borg (13-5) finishes his UFC career with a 7-5 record inside the octagon. In his most recent appearance for the promotion, at UFC Jacksonville in May, he fell to Ricky Simon, losing a split decision. 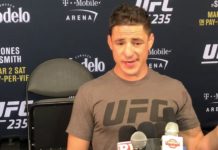 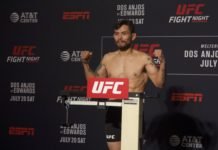