After suffering a rare knockout loss against Justin Jaynes back in June, Frank Camacho has his next opponent set: Brok Weaver.

Camacho (22-9) and Weaver (15-5) are expected to face off at a UFC event scheduled for September 12. Although not officially announced, the card is expected to take place in Las Vegas, NV.

The Fight Bananas podcast was first to report news of the booking.

Prior to his loss against Jaynes, Camacho had been submitted by Beneil Dariush at UFC Singapore last October. That leaves the Guam native badly in need of a win next month. Camacho is just 1-4 in his past five bouts, with the lone win coming against Nick Hein, and additional losses to Drew Dober and Geoff Neal.

Upon entering the UFC, Camacho became famous for thrilling, downright nasty wars, earning three consecutive Fight of the Night awards. However, he’s missed weight twice in the promotion, including in the bout against Jaynes.

Brok Weaver (15-5) won his way into the UFC as part of the Contender Series. A Native American, from the MOWA Band of Choctaw Indians, Weaver picked up a win in his octagon debut after being illegally kneed by opponent Rodrigo Vargas. That resulted in the DQ victory. Months later, Weaver was submitted by Roosevelt Roberts at UFC Vegas 1.

Weaver missed weight for the bout, as Camacho did in the Jaynes fight. 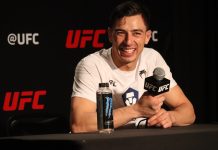