There’s always a segment of MMA fans that love storylines to run parallel with fights. Because when all is said and done, there’s a need to understand what the fight means, beyond dollars and cents, or even simple career progression.

Which brings us to Trevin Giles vs. Kevin Holland. The fight, announced barely over a week ago, is a welcome enough middleweight addition to a sparsely populated UFC Vegas 5 card.

It just so happens that Giles and Holland both call Texas home — Holland from Fort Worth, Giles out of Houston. Which might lend itself to a little friendly rivalry. Giles, however, isn’t buying into it.

“I think it’s a it’s a coincidence, man. I think it’s something that’s interesting to throw into the mix, just because we’re both from Texas,” Giles told Cageside Press during the UFC Vegas 5 media day. “To say, ‘Oh, this is this is a battle between cities’ or something like that. I mean, I don’t see it that way. He probably doesn’t see it that way either. I think it’s exciting that me and him are from Texas, and we get to go in there and throw down. But it’s not a battle between cities or nothing like that. I don’t think so.”

When Giles isn’t fighting, or training, he’s working as a police officer back in Texas. Which, you would imagine given the current social climate in the U.S., not to mention with a pandemic raging, would be quite the distraction. It might not have been as bad as you’d think, though.

“My side of town that I work on is crazy anyway. It’s always somebody doing something. It’s always busy at work,” explained Giles. “But as far as preparation goes, it hasn’t gotten away too much. I usually train and do all my sparring and everything in the morning, and then go ahead and head to work in the evening. So it doesn’t really get in the way of my training much.”

The pandemic was a concern, however. Even fighting right now was. “There was part of me that didn’t want to fight, just because I have a family to think about.” Giles was somewhat concerned about bringing something home to them. But at the same time, “I’m already in that predicament every day at work,” he noted. After all, he has no way of knowing if someone he arrests is infected with the coronavirus.

“It’s probably a lot safer right now. I’m probably at less of a risk to catch COVID than I would be at work,” Giles finished. “It’s not such a bad idea, fighting right now.” 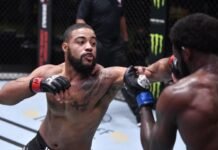 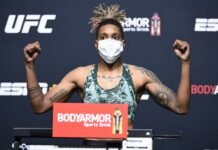