UFC Vegas 5 marks the promotion’s return to the UFC Apex as a middleweight showdown between Derek Brunson and Edmen Shahbazyan headlines the card. Cageside Press has its picks set.

The main event of UFC Vegas 5 pits veteran Derek Brunson against rising contender Edmen Shahbazyan. The middleweights were originally set to battle in March, then April, and now tonight after the COVID-19 pandemic pushed things off. Brunson is back on the upswing with two straight victories while Edmen Shahbazyan is an impressive 11-0 with three stoppages in four UFC appearances. All but one writer picked Shahbazyan.

Joanne Calderwood has passed over a title shot in favor of one more fight against Jennifer Maia. Calderwood is 3-1 since returning to flyweight and Maia, a former Invicta champion, has won two of her last three but has missed weight in her last two appearances. All but two writers picked Calderwood.

Vicente Luque and Randy Brown get to fight after their originally scheduled bout in April was postponed. Since an unsuccessful UFC debut, Luque has been excellent with an 11-2 record and stoppages in every victory. Brown has won three of his last four, with finishes in his last two fights. Luque was picked by seven of 10 writers.

After a draw back in 2017, Bobby Green and Lando Vannata will enter the Octagon again. Since then, Vannata is 2-2-1 while Green is 2-2 and retired briefly. All but one writer picked Vannata.

Opening up the main card will be Kevin Holland against scrappy grappler Trevin Giles. Holland has a solid 4-2 record in the UFC with a pair of stoppages and a 39-second KO in his last bout. Giles won against James Krause on a day’s notice last time out, stopping a two-fight losing streak. All but one writer picked Holland.

Due to its late addition to the main card, the bout between Gerald Meerschaert and Ed Herman was not picked. 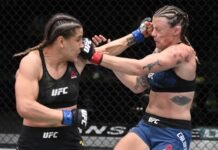