For a fighter who came away with a win at UFC Fight Island 3, Ramazan Emeev was awfully down on his performance.

Downright disappointed. “I’m feeling good, but I’m just not happy with my performance,” he told Cageside Press following the bout. “I want to finish fights early.”

Part of the issue was the location of the bout. As positive an experience as Fight Island has been for some fighters, Emeev’s stay there added some obstacles in training. “The last four weeks I was on an island, didn’t get proper training, training partners. It’s not the same as training in the gym,” he said.

Opponent Nicolas Dalby, who came into the fight on short notice, was perhaps another factor. “I didn’t expect it to be that hard of a fight, but I guess he is a good fighter and he wanted to impress you,” Emeev opined.

And so next time out, expect a different Emeev to enter the octagon. “I’m going to change some stuff. I’m going to come to train really hard,” he promised. “My last fights, five fights, I had a decision and I really don’t want a decision next time. I want to get a stoppage for a change. I’m going to add something into my wrestling, into my kicks, punches. I’ll try my best to get the finish.”

Still, it’s hard to find fault with the former M-1 Global champ’s UFC run thus far. With the win over Dalby, Emeev (19-4) improved to 4-1 inside the octagon. 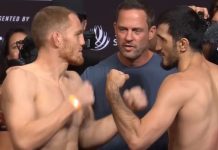