Isaac Vallie-Flagg will go toe-to-toe against Luis Palomino at BKFC 11. The two compete for the inaugural BKFC 155lb title on Friday, July 24. The event emanates from Oxford, Mississippi with a dual broadcast live and free on the Bare Knuckle TV app as well as BKFC’s Youtube channel. After Jim Alers had to bow out from this fight (a precautionary measure after someone close to him tested for COVID 19), Vallie-Flagg stepped up in a big way.

Vallie-Flagg specifically recalls when he found out about this title fight opportunity. “It was exactly three weeks out to the day. We just got the call and I jumped at the opportunity. I feel bad for Alers and his camp and I hope everybody there’s healthy. But obviously, if you get a title shot, you’re not going to say no.”

Palomino is someone that Vallie-Flagg is more than familiar with, and he knows what he’s getting into on Friday night. “I was a fan of his when he did MMA and obviously he was in the 155lb tournament. So it was somebody who I watched. I’ve seen him fight as a fan before and tried to study him also. He’s good. He’s a very good fighter. He brings some tricky stuff to the table that I’m going to have to be aware of.”

This has all been quite the saga for Vallie-Flagg these last few years. His last MMA bout was in Summer 2016, there was a period of substance abuse issues and trouble with the law. However, Vallie-Flagg mounted a comeback and is now unbeaten in bare knuckle boxing through three fights, and is poised to fight for a championship.

“It’s the culmination of living right and putting my trust in some stuff,” he told us. “Really pushing some skills that I knew I had. That I really did not take advantage of and kind of messed up before. This last year and a half or two years of doing the bare-knuckle stuff has been a weird ride. But it’s been really fun. I’m excited to be here. I said after I beat Melvin that I want a belt this year. And this is my shot at it. It’s not like we didn’t expect it. It just came a little bit differently than we expected.”

Vallie-Flagg’s bare-knuckle debut was with the infamous WBKFF, who did not pay him (as well as numerous other fighters on that card). He then transitioned to BKFC and it was a night and day difference.” David [Feldman] and all those guys have been leaps and bounds better obviously than the last guys. I’m glad I ended up where I did.”

Isaac Vallie-Flagg wasn’t able to work with his main coach ahead of this one. The COVID landscape has made things different this camp. He didn’t have as many people sparring in the training quarters. The mindset is still sharp though and Vallie-Flagg is locked in.

The Greco Roman skills from MMA have allowed for many mixed-martial artists to transition quite seamlessly into the BKFC ring. This is a characterization that Vallie-Flagg agrees with too.

“I think the ruleset definitely benefits somebody who likes to be in the clinch.  It’s not boxing, it’s not MMA, it’s kind of like a hybrid. I think the transition is there. A lot of guys like to grab. So it’s not pure boxing. You can’t just sit there and not grab. You can grab and dirty box. I think that’s one of the biggest things.”

Considering his efforts as a pugilist, it’s cool that Vallie-Flagg can support pacifism as well. Much like his buddy Clay Guida, Vallie-Flagg is a fan of The Big Lebowski and the film’s main hero The Dude. “I try to be like The Dude, for sure. Clay’s a good friend of mine. There’s a few of us that are Big Lebowski fans. Trying more and more to be like The Dude. Just kind of abide to whatever life has in front of me, you know?”

As a parting thought, Vallie-Flagg had this to say, “I’m just looking forward to Friday night. Getting the belt wrapped around my waist. That’s all, man.”

The Dude abides. And BKFC 11 goes down this Friday, July 24 Oxford, Mississippi. 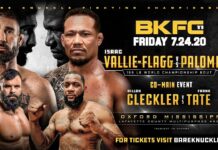 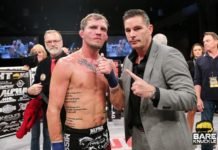 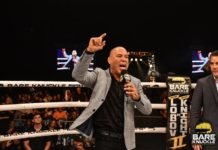 BKFC 11 Set For July 24 In Florida With Fans