Jim Alers takes on Kaleb Harris at BKFC 10. It’s part of a 155lb tournament looking to crown the inaugural champ in the weight class, so expect this fight to be fire.

The BKFC 10 card unfolds Saturday, February 15 at Greater Fort Lauderdale Convention Center in Fort Lauderdale, Florida. Alers vs. Harris is a quarterfinal bout in the tournament. Alers and Harris have both scored highlight-reel KOs and the extra motivation of capturing a title will likely result in a barn-burner here.

This chance to capture some hardware in BKFC has been a long time coming for Jim Alers. “It’s a lot, man. I’m excited about it. I’ve always felt already I should be crowned the champion,” Alers revealed to Cageside Press ahead of the fight. “But I know BKFC wants us to do this tournament. Which is cool, I get it. I’m pretty confident going into it. Kaleb is overall a nice guy and a hard hitter. I’m excited to see where this fight’s going to go.”

It’s a great time to be Jim Alers and it seems like things are reaching a crescendo for him. Alers stated, “I like that I’m getting the recognition that I feel that I deserve. I never thought that I was going to go this far with the promotion but after my first fight and especially the Garcia fight. It was such an honor to fight someone like that and just kind of finish Garcia the way I did.”

A crazy journey considering Alers initially saw bare-knuckle boxing as a bit of a one-off curiosity. Alers remarked, “It was just like ‘Hey, let me give this a try.’ They reached out to me actually before I ever watched any. I went back and took a look at it. It doesn’t look as bad as it sounds.

Though becoming the inaugural BKFC champ in his division is important, Alers also wants the Police Gazette belt too. Alers said, “It would mean so much to be a police gazette champion. To be in the bare-knuckle hall of fame. Just be a part of history. That would be great.”

Though Alers did score some striking stoppages in MMA, he was primarily known as a Jiu-Jitsu player. The transition to BKFC has yielded him several highlight-reel stoppages with his fists.

“For me, MMA I always went to my bread and butter. I used my striking but not to knock people out. I used it to get people to put their hands up and then take them down. Then I submitted them,” Alers explained. “Now I’m strictly focusing mostly on my standup to finish the fight. If I rock you, I’m gonna try to finish you.”

Training is also a lot lighter on the body for BKB as compared to MMA. He still trains everything all the time but there’s not as hard of a push with wrestling anymore. Speaking of mixed-martial arts, Alers lost to Jason Knight in MMA and there have been many talks about a BKFC rematch.

On that front, Alers stated, “That’s the one fight in my career that I actually felt like I got beat”

“It was close, people say ‘oh man, you won.’ I looked at it and I felt like I lost,” he admitted. The sequel will be put on the back-burner for now as the 155lb title tournament obligations will occupy his attention for the year. Which means his attention is squarely focused on Kaleb Harris at BKFC 10 and advancing further in the 155lb title tournament. 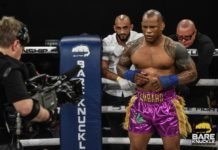 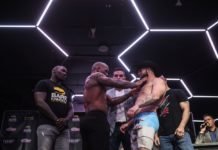 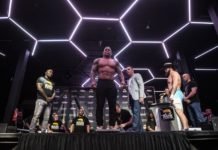