Are the Welsh coming to take over MMA? Brett Johns says you’ll be seeing “monsters” coming out of Wales soon.

Securing his second straight win at UFC Fight Island 2 was Welsh bantamweight Brett Johns. Although, after picking up a unanimous decision win over Montel Jackson, he almost sounded more like a fighter coming off a loss.

“I think my coaches are going to slap me about after this. I’ve been saying this for the last hour or so: I’m not particularly happy with my performance,” he told Cageside Press following the win. Johns (17-2) was dropped in the fight, which may have something to do with it. “But there was a lot of adversity going into this camp. My actual preparation for the fight was fantastic. Just with a new team and stuff, was a different experience.”

Of course, overcoming adversity in a fight could be seen as a positive, Johns noted. “I showed a different character. Not that you plan on getting dropped in a fight. But that side of it does happen and you’ve got to try and get on top of that and win,” he observed. “It was a tough fight, it was a prospect I was fighting tonight as well. Which is another thing off my bucket list of people to fight. Someone who’s an up-and-comer, very dangerous, three-fight win streak.”

In fact, said Johns, “I felt like I was brought in here to lose to someone like him.”

If that was the case, it didn’t happen. The matchmakers got it wrong. But at only 28, Brett Johns has plenty of room for growth himself. Especially now that he’s with a new team, and coach Richard Shore. If that name sounds familiar, it should: son Jack Shore is currently a UFC fighter. One who picked up his own win an event prior.

“We’re telling people that we’re creating these monsters, and nobody is listening.”

When we spoke to Jack Shore, he addressed the topic of Welsh MMA, saying “give us five years and we’re going to take over.”

Remember those words. “But give us five years and these names are going to be so loud that you can’t avoid them,” Johns added. “People like Oban Elliott. Then up-and-comers who are coming through the ranks. We’ve got youngsters there who are absolutely terrifying. To be honest, I’m just happy to be part of that team and happy to be part of that list of killers.” 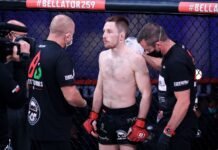 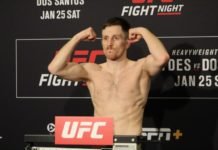 Bellator 259: Brett Johns Reveals When Fighting Became a 9 to 5 Job For Him