The UFC’s stint on Fight Island has had a couple of underlying themes. On the Fight Island 2 card this past Saturday, one was redemption (see: Figueiredo, Deiveson). Another was arrival. Any number of promising talents have arrived in the three Abu Dhabi shows to date. Khamzat Chimaev did in a big way at UFC Fight Island 1.

At UFC Fight Island 2, it was Amir Albazi’s turn. “The Prince,” a Swede training with London Shootfighters, picked up a submission win over fellow newcomer Malcolm Gordon on the card. Even better, the triangle was the first such submission seen in the UFC this year.

“It went picture perfect, exactly as I planned,” Albazi (13-1) told Cageside Press following the victory. “I lay in my bed, I visualize all the time, and this is exactly how it went. Just no different.”

One thing he probably didn’t visualize in advance was how rushed the fight was. “I got the call Wednesday morning, 10 days out exactly,” he told us. “Literally in the morning on my way to training. I finished the sessions, went back home, packed, and went to the airport straight away.”

Now, short-notice fights are nothing new in MMA. But the coronavirus and Fight Island’s locale added a twist. “What I didn’t know was we had a 48 hour quarantine in London, then another 48 hour quarantine in Abu Dhabi,” said Albazi. “So yeah, it was different than I expected. But I’m ready to fight any day. If you call me up tomorrow, wake me up, I’m ready to fight.”

With all that down time, Albazi worked out where he could. “I’ve worked out in worse places. So if I get a hotel room, I just move the beds, move the tables, and do what we can do.”

Following the fight, Albazi noted that he’d been working on that triangle since he was 14 years old. But while jiu-jitsu was where he first started competing, it wasn’t exactly voluntary.

“It’s a funny story— it wasn’t really a first love. I got kind of pushed into it,” he told us. “I always wanted to do MMA, but in Sweden when you’re like 14, at least when I started, they don’t let you train or compete in MMA. So they told me ‘listen if you want to compete, there’s jiu-jitsu.'”

Which looked to Albazi like “some people with pajamas rolling around on the ground.” Still, he took it up, learned it, “and since then, since I was 14/15, I’ve been doing triangles consistently.”

Saturday night, it paid off. The expectation now is that Albazi will drop back to flyweight — “yeah to be honest my weight class is flyweight. But with all this quarantine and 10 days notice, we decided to do it at bantamweight,” he observed.

When that will be and who it will come against is another matter. “This is my debut. I need to win a couple of fights and then I can call people out,” Albazi said Saturday. “I’m not the type that comes in on my debut and starts calling people out. I don’t think that’s the right thing to do.” 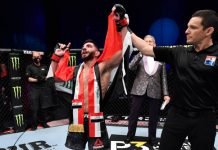 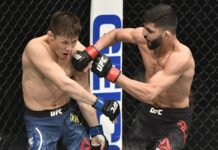