“I’m so happy for this happening,” she exclaimed post fight, in a virtual media scrum with Cageside Press and other media outlets. “I was training for this moment.”

Confident in her training camp, Lipski (13-5) stated that “I just wanted to go in there and have fun, and entertain the people at home, and show how much I’ve improved.”

She may have had fun. Caolina clearly did not. The end came just under 90 seconds into the opening round. Lipski had got off to a good start on the feet, and knocked her opponent off-balance with a body shot. On the ground, in a scramble, Lipski worked on a calf slicer. Then switched to a kneebar, wrenching Carolina’s leg back, forcing the knee in on itself and eliciting a blood-curdling scream.

With that bonus-winning finish, The Violence Queen has properly arrived in the UFC.

It’s been a long time coming. Lipski reigned supreme in KSW, and had high expectations placed on her when she signed with the UFC — only to stumble out of the gate.

There were reasons for those missteps, however. “When I went to the UFC I was almost one year outside of the cage. In this break, I had three injuries consecutively, so I was not in the best shape,” she admitted.

When the promotion offered her a huge fight for her debut, however, she could not turn it down. “They gave me the opportunity to fight against JoJo [Joanne Calderwood] on the first UFC [event] on ESPN [UFC on ESPN+ 1], so I was very excited. When I lost my first fight in the UFC, I had some problems with the haters. People talk a lot of sh*t. I had never asked for this situation.”

Lipski took a blow to her confidence, which was compacted by losing her second fight. “Then my last fight was so crazy, they changed my opponent three or four times, and I just knew my opponent one day before. And she didn’t make the weight.”

Knowing the risks, Lipski took the fight regardless, and earned her first UFC victory. “I learned a lot. And I have no pressure on my back. People can say what they want, I don’t care. I’m sure who I am.”

And she’s The Violence Queen, in fine form Saturday. With two straight wins at her back now, Lipski is eying the rankings. But, the Brazilian said, she intends to do things right.

“I don’t have a name, I’m looking to the rankings, I’m prepared for that,” Lipski stated. “I’m young, I’m only 26, I want to do everything at the right moment.” Which means talking to her coach, manager, and team about the best option. “But I want to fight as soon as possible.” 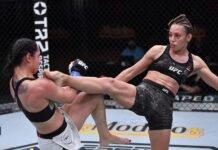 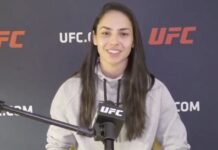