Figueiredo’s last time out, he absolutely demolished Joseph Benavidez in the second round after placing a picture-perfect right hand down the pipe right after his opponent cleared his eyes of blood and dropped his hands slightly. Though there was controversy with an accidental head butt and the fact that Figueiredo was actually ineligible to win the belt because he missed weight. Figueiredo is a pretty big guy for 125lbs, and his muscular physique only builds to the intimidation factor as well as undoubtedly playing role in his punching power.

Since entering the UFC about 3 years and a month ago, Deiveson Figueiredo has finished 5 high-level fighters. Deiveson hits hard and has brought a lot of stoppages to a division that many UFC fans had described as ‘boring’ in the past.  Figueiredo has some very violent hands, though his right hand is his favorite, which seemingly lifts his opponents off their feet if he catches them flush. And when Deiveson gets his opponents to their backs, it gets very ugly, very quickly as the strikes that he rains down as ill-intentioned as it gets. Any fight with Figueiredo is a must watch as any fight that he is in could end very violently and in the blink of an eye. Figueiredo has hands like a snack-sized Francis Ngannou and on July 18th he will run it back against Joesph Benavidez for the flyweight championship. 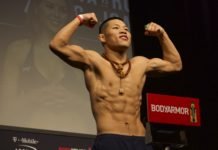 Li Jingliang vs. Dwight Grant Lined Up for UFC 256 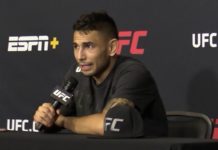