Just weeks after his UFC Norfolk victory against Sergey Spivak, Polish heavyweight Marcin Tybura suffered an enormous personal tragedy. As the first wave of the coronavirus pandemic blanketed Europe, Tybura was forced to endure the death of his father.

“There was a hard time for me like from the beginning,” Tybura revealed, when asked about preparing for the Grishin fight. “It was actually that my father died weeks after my last fight.”

That led to Tybura spending a lot of time at home. But, said Tybura, “the guy raised me as a hard worker. He for sure wanted me to go back here as soon as possible and do my job. I’m his son, he raised me this way.” His father wanted him to carry on, of course. And so he did. “When there was anything available for training, I was training during the pandemic. And I was much more motivated to come back to the octagon than ever before, so anything that comes up I agree straight away.”

Tybura went on to clarify that the coronavirus was not directly behind his father’s death. But at the same time, the pandemic certainly didn’t help things. “Healthcare was, of course, really hard to get because now the hospitals were changing [because of] the Coronavirus patients,” he noted.

No doubt father would have been proud of son’s performance at UFC 251 on Saturday. And now, with a second straight win under his belt, Tybura is looking up in the heavyweight division. Specifically to a ranked opponent — and he has one name in mind.

“Right now I’m in a position to start climbing the rankings, and fight somebody at least from the top 15, in the bottom,” Tybura told us. “I’m thinking about Aleksei Oleinik, which is the only one who I didn’t fight yet.” 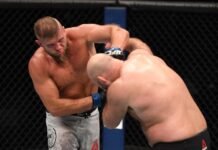 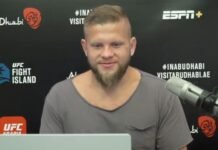