As a teacher and a mother, as well as a UFC athlete, Marion Reneau has seen the toll of the coronavirus pandemic from several angles.

Reneau (9-5-1) returns to action this Saturday, taking on a former title challenger in Raquel Pennington. It will be a birthday bash for “The Belizean Bruiser,” who will turn 43 on the night.

Yet the bantamweight is also sympathetic to how the year has gone for her students. Not to mention her own son, who just finished high school.

“It was crazy, how everything happened. And it was all of a sudden at once, and then everybody was afraid and scared,” Reneau observed. “It was it was really not a great year for our students, the way we ended. So I feel kind of bad for them. I feel for our seniors, my son being a senior himself. I feel bad that they did not have the graduation that everybody else has had, or had the farewell that they needed to have as seniors.”

Reneau also runs a gym, Trifecta, which gives her yet another perspective. “As a business owner, we had to shut down for a couple of months. I feel bad for businesses who had to close permanently. It’s been a crappy situation for a lot of people.”

Such is the reality right now, with the coronavirus pandemic making these uncertain times. But Reneau’s advice to her students is to move forward.

“I only do freshmen females, I guess I’m lucky that way. And basically, I just keep telling them to move forward,” she said. “This is nothing. And this is just a part of history that they get to live through. They didn’t get to live through the 9/11 history, which I love to talk to them about. But I talk to them about this history as well. And they’re going to make it through this history, it’s going to be a lot of changes, but just to keep moving forward. And I urge them obviously to reach out if they ever need anything, and I do get a lot of them who reach out. And it’s great that they can trust me in that aspect.”

In the meantime, Reneau has a fight to worry about. One that has been a long time in the making, it seems. To hear “The Belizean Bruiser” tell it, it’s almost a pick ’em. A very evenly matched fight.

“If you look at both Raquel and I, we both match up fairly well, both in the standing and I’d say on the ground as well. So I think it’s going to be an exciting fight,” she predicted.

Watch the full UFC on ESPN 11 media day scrum with Marion Reneau above. 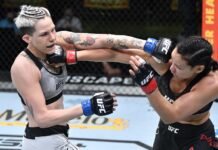 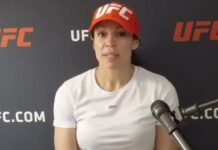 UFC Vegas 22: Marion Reneau Learned Not to Dwell on Losses as Heptathelete