This Saturday, Clay Guida has another tough fight, this time at UFC on ESPN 11, against Bobby Green. He’ll also be celebrating an anniversary. It will be eleven years to day since his fight with Diego Sanchez — a bout that landed the pair a spot in the UFC Hall of Fame.

“I’m glad you brought that up. I knew [it was the anniversary] because of last year when we had our Hall of Fame induction. Thank you very much to the UFC. Thank you for Diego Sanchez, because I couldn’t have done that by myself, obviously. And it’s amazing because it feels like that was just yesterday,” Guida said of the occasion at Thursday’s UFC on ESPN 11 media day, when the date was pointed out to him by Cageside Press.

“This whole fight week has been awesome. A lot of similarities to my UFC debut back in 2006, at UFC 64 and Mandalay Bay. I got into my hotel room this week, I opened the window just to kind of see what my view was. And boom, the first thing that popped out was, Mandalay Bay is the only casino I can see from my hotel room. So that’s pretty special. And then I kind of I just went for a run and I was by Orleans which is near the Palms. Some some of my greatest fights, even though I didn’t get my hand raised, you know the [Roger] Huerta fight, the Diego Sanchez fight, Anthony Pettis fight— those will be the ones that people always remember.”

The Sanchez fight came at the Palms, and ended in a split decision against Guida. Still, it’s clear that the memories aren’t all bad.

“One thing I took from the Diego fight is what my coach and my brother were telling me all camp: ‘don’t back up dummy, don’t back up.’ And what did I do at the very beginning of the fight? Diego rushed me, and I just kind of backpedaled, backpedaled, and then came the onslaught,” Guida recalled of the 2009 classic.

“Just that barrage of punches and knees and kicks. He opened me up and then the kick heard around the world,” he continued. “I definitely take several things from that fight but that was one where the whole tide of the fight changed immediately. And you know, I thank him for that because he taught me a valuable lesson, and that probably got me the Fight of the Year. Not just because of that exchange right there. So thanks, Diego. We’re coming up on 11 years, man, pretty amazing. We’re still going at it.”

Eleven years later, and Guida (35-19) is, in fact, going strong. He’s 3-2 in his past five, and gets to take care of some unfinished business against Green on Saturday. Though despite referring to Green as “Bobby Yellow” after Green pulled out of a previous bout, there’s no hard feelings here.

“I’ve never been personal. I mean, with my opponents, I don’t know them well enough to dislike them. I don’t dislike anybody. You know what I mean? Life’s too short for that,” said Guida.

As far as what sort of fight he’s expecting, he added that “I know it’s gonna be a dogfight I know Bobby is going to come prepared. He’s going to come ready because I know he wants to fight too. And he’s a gamer you know? I mean, he comes to put on a show. He’s flashy. He’s a good striker, a good wrestler, good athlete, and it’s gonna be a great fight.”

Watch the full UFC on ESPN 11 media day scrum with Clay Guida above. 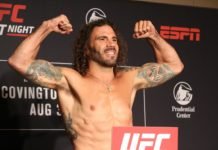 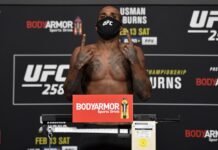 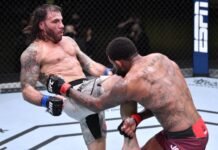 Jared Gooden Knows Job Is On the Line at UFC Vegas 33, Doesn’t Like...