The UFC is coming back to the UFC APEX arena for the third straight week following UFC 250. This time out, the show is being headlined by two flyweight contenders in Jessica Eye and Cynthia Calvillo. Other notable fighters at the event include Marvin Vettori, Ray Borg, Andre Fili — and there are a few other bangers on the card.

In a women’s flyweight bout, newcomer Mariya Agapova was originally supposed to fight Melissa Gatto. However, Brazil’s Gatto pulled out due to travel restrictions. Now Agapova will take on Hannah Cifers, who is coming fresh off her loss to Mackenzie Dern just weeks ago.

How will Agapova fare in the UFC:

Agapova is a nice prospect training out of Kazakhstan but living in Coconut Creek, Florida. Training out of the great American Top Team which has been a reason she’s progressed so much already. Of late, she’s been competing for Invicta FC. On the feet, Agapova is actively moving, always throwing a lot of output. She has an awkward style but uses her long limbs with straight punches and the liver kick. She thrives on the mat more as her ground-and-pound is her best weapon and she can threaten with submissions everywhere. Her takedown defense needs work mainly but with her footwork improving she will only get better with time.

How Agapova matches up with Cifers:

Cifers is best defined by her strength and the power in her hands. Cifers has to be in her range to find any success but Agapova is a better rangy fighter who should be able to stay on the outside. Agapova should be able to keep Cifers at the end of her kicks and strikes. If the fight was to hit the mat it’s clear Agapova would have a big advantage even off her back. 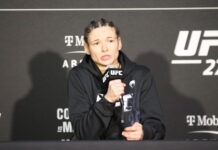