Should Amanda Nunes get past Felicia Spencer this Saturday night at UFC 250, she will etch her name in the history books as the first double champion in the promotion’s history to defend two different titles while holding them both simultaneously.

Couple that with the fact that she’s already cleaned out all other female fighters at both bantamweight and featherweight, and it’s almost as if there is nothing else left for her to do. While there is great talent beneath her in the rankings, the number of formidable contenders to challenge her is quite low. While Spencer has rightfully earned a crack at the crown, that doesn’t make the prospect of having to fight Amanda Nunes any easier. Spencer is in for unquestionably the most dangerous fight of her career, and Nunes is yet again in a position where the vast majority of the fanbase believes she cannot lose.

No matter what the result is on Saturday night, it is past time that people start playing closer attention to Nunes. She is a special fighter at the peak of her career right now, and her outstanding performances are truly something to behold. 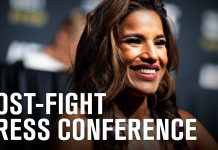