The “Teenage Dream” is just out of his teens, but 20-year old Chase Hooper is still a surprisingly young figure to be in the UFC. After earning a first round TKO of Daniel Teymur in his octagon debut, however, Hooper has proven that he belongs.

Now, it’s time for him to show he has staying power. That all starts Saturday at UFC 250, when Hooper throws down with Alex “Bruce Leeroy” Caceres. The fight serves as the featured preliminary bout on ESPN.

Hooper (9-0-1) has shown plenty of personality thus far in his short career. From his love of M&M’s to being part of the extended Ben Askren family, Hooper’s quirky sense of humor has likely attracted its own share of fans. That continued during the UFC 250 Fight Week, when on media day, the youngster was asked if he’d been mistaken for Sean O’Malley yet.

PSA!!!!
Stay away from the Devil’s Lettuce people 🙅🏻‍♂️🚫🍁 pic.twitter.com/zK4t1RNhS8

“I think that the way that he changed his hair up, I don’t think we’ll get mistaken too much,” Hooper replied. O’Malley, for his part, was sporting rainbow-colored curls this week. “But, yeah, it’s cool to be fighting on a card with another high level guy. He seems super cool. From the interactions I’ve had with him. I talked to him a little bit. You know, he seems kind of down with the whole Askren family thing.”

MMA’s curly-haired family continues to grow. On a more serious note, Hooper has a very experienced opponent to contend with come Saturday.

“I like this match-up style wise because he’s very flashy on the feet. Whereas I’m really flashy with the grappling stuff,” he said of the pairing. “So it’s going to be both of us trying to kind of counter each other’s games. I just think that he’s not a huge finisher, he’s not a huge knockout guy. It’s not like the last guy I fought where he is a world champion kickboxer, that he’s going to knock me out the whole time.”

Instead, Hooper sees his upcoming opponent as more of a point fighter. “For me it’s more, I gotta chase after him, I gotta get hold of him, obviously. And keep it from going 15 minutes. I feel like he’s more of a point fighter. He wants to do some flashy stuff and try to put on a show. But that’s going to be my job to counter it. And I think my game works pretty well against it.” 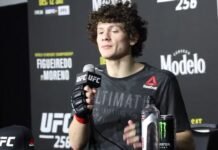 UFC 256: Chase Hooper Discusses Pressure of Having Only Fifteen Minutes to Show Development As a Fighter 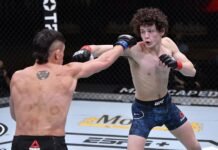 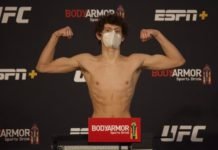