Ouch. That was the immediate reaction to Cortney Casey’s fight-winning arm-bar at UFC on ESPN 8 in Jacksonville on Saturday. The final of three shows in eight days in the Florida city was capped by a heavyweight pairing. Alistair Overeem vs. Walt Harris was certainly entertaining, frankly heart-breaking, and brought with it a finish. But the headlining duo was left out of the bonus pool, with the awards instead going to some of the evening’s earlier combatants.

Including Casey. Who latched on to opponent Mara Romero Borella’s arm after the Italian had taken their fight to the ground, and proceeded to hyper-extend the limb while cramped along the fence. Borella cried out in pain, tapped, and Casey had her first finish since 2016 — also an arm-bar.

That landed her a Performance of the Night bonus. Rising prospect Miguel Baeza also secured one, for a crushing knockout of Matt “The Immortal” Brown. In a sport where the old are far too often fed to the young, Baeza’s win put him on the map, even if it did come against a fighter who was competing when he was just a kid.

Finally, Fight of the Night went to Song Yadong vs. Marlon Vera. After all the “will he, won’t he” talk of Song fighting, due to last-minute visa issues, the bout went off without a hitch. Going the distance, Song Yadong took home the unanimous decision, winning two of three rounds on all three scorecards.

Each bonus winner takes home an extra $50,000 for their efforts. 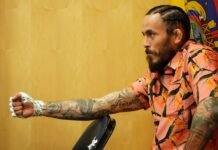