When all is said and done following UFC 249, there will be but one certainty: At least for one night, big league sports returned. MMA was back in town.

There are those that would question the UFC’s motivations for return. Those that would question the wisdom of hosting a sporting event in the midst of an ongoing pandemic. Those voices saw their point underlined when Jacare Souza tested positive for the coronavirus on Friday; the fighter, who was supposed to be in isolation, instead was seen in close contact with other fighters earlier in the week. Not to mention at Friday’s weigh-in, fist-bumping Dana White (albeit while gloved — but White, unfortunately, was not).

Yet the comeback to those concerns is that the system worked. That’s the UFC’s take. Souza tested positive, and will not fight. Now, it will come down to contact tracing — tracking down who he has been in contact with while sick. Two of his team members tested positive as well. Uriah Hall, Souza’s scheduled opponent on Saturday, did not. At least so far.

It will be weeks until we know the full story. Souza was asymptomatic. That’s the problem with the SARS-CoV-2 virus, which can lead to the deadly COVID-19: it’s highly contagious, and stealthy.

But again, there’s only one certainty through all this: at least for one night, the masses were entertained. Fighting was back. On a card full of promising fights, at least on paper. Whether it was worth it, we’ll soon know.

Following UFC 249, tune in for the post-fight press conference. The live stream is available above. 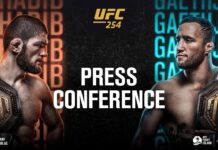